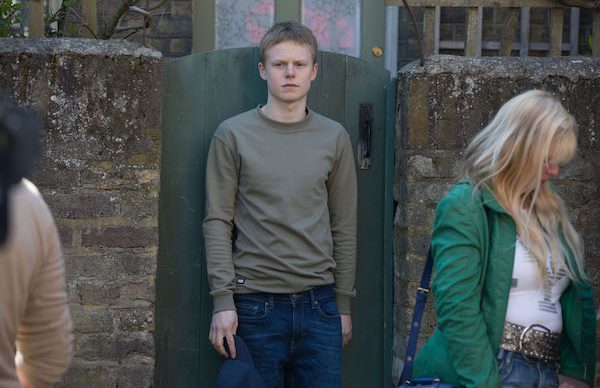 He's not happy back on the Square

The return of Bobby Beale to EastEnders was never going to be easy for the murderer and things get so difficult for him next week he flees.

With his dad, Ian, not having returned to meet him from prison, things are extremely awkward between father and son when Ian does finally make a comeback to Walford.

Ben suggests a big family reunion in The Vic, but the locals aren’t pleased to see Bobby – especially Max.

Despite supportive words from Denise and support from another unlikely source, things become too much for Bobby, who rushes home and demands everyone leave him alone.

With Ian preoccupied (as usual) with business matters, he’s shocked the next day when Bobby returns home with a bruised face.

The lad refuses to cooperate with the cops, so Ian takes matters into his own hands.

He publicly grabs Max in the Square and confronts him over the attack, but Max denies any knowledge.

Bobby is forced to come clean about what really happened.

When Ian then discovers Max is his new business partner, he’s raging, but Kathy gives him a harsh reality check.

As Ian realises he’s not been supportive enough to Bobby, he arranges a family meal. Will it be enough to make Bobby feel safe and loved at home?

Desperate to help his son settle back in, Ian later suggests home tutoring rather than school, but Bobby’s dismissal leaves Ian scratching his head over what to do next.

In his room, Bobby gets a call from a friend and it gives him the reassurance he needs, leading him to apologise to his dad.

Ian vows to keep Bobby close – but Bobby has other ideas and sneaks out, running away.

Where has Bobby fled to? Will he be back? And can he ever settle back home without any drama?

Are you enjoying Bobby’s return storyline? Leave us a comment on our Facebook page @EntertainmentDailyFix and let us know what you think!