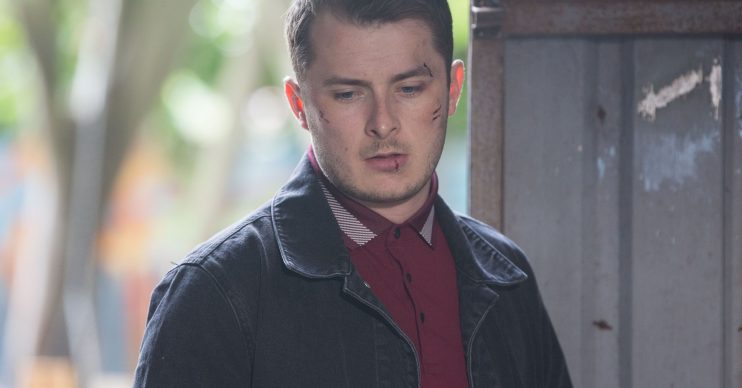 Fans of EastEnders watched in horror as Stacey Fowler smacked Phil Mitchell over the head with a spanner during last night’s episode.

Tuesday’s cliffghanger (July 30) saw Phil on a red-faced rampage where he tried to hurt both Kat Slater and Martin Fowler – until he was hit from behind.

In explosive events, the mechanic with a history of using his fists rather than his only brain cell was livid after being mocked by Kat over his missing £50k.

After Phil threatening Kat’s son Tommy, the pair had a furious bust-up in The Arches and Phil looked like he wanted to seriously harm Kat.

But when Martin burst in, he took the beating instead.

As Phil was choking Martin and threatening him with a crowbar, his wife Stacey Fowler appeared from nowhere and smashed Phil over the head with a spanner.

Viewers saw Phil lying on the car pit of the garage, apparently bleeding from his head.

And Thursday night (August 1) sees the aftermath of the brawl, with Ben Mitchell, Phil’s son, arriving at The Arches.

As Stacey Martin and Kat look at Phil’s body in complete shock over what’s just happened, they scramble round, desperate to cover their tracks.

Meanwhile, Ben, who has planned to meet Keanu at The Arches after finding out Phil had changed his will in favour of Keanu, is on his way over.

He turns up and finds his injured father lying in a pool of blood, and surprises the culprits in the process.

How will he react when he sees them there?

Can they convince him they didn’t do it? Or will they confess all and beg Ben to help them cover up the crime?

Next week sees an arrest made, but will the right person get taken in by the cops? Or have the Slaters and Fowlers managed to get away with it?

Do you think Ben will catch Stacey out? Leave us a comment on our Facebook page @EntertainmentDailyFix and let us know what you think!