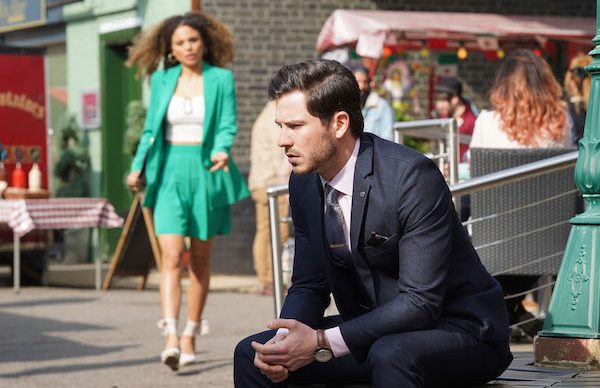 Are the violent solicitor's true colours about to be revealed?

There’s danger in next week’s EastEnders when violent Gray Atkins turns on someone else in his family – but who is he targeting?

EastEnders fans were left horrified when it was revealed that Chantelle and Gray Atkins’ marriage was far from perfect.

To the rest of Walford, the pair are a match made in heaven.

They’ve got the biggest house on Albert Square, they’ve got two beautiful children and, to the outside world, they apparently couldn’t be happier.

But it has been revealed that behind closed doors, Gray is violent towards Chantelle, and it seems his abuse has been going on for some time.

Next week’s EastEnders sees another twist in the storyline when Mitch Baker finds himself on the receiving end of Gray’s violent side, and the whole of the Taylor family are left reeling.

The drama starts when Keegan Baker announces that he has decided to quit school, much to the horror of his parents.

Karen Taylor and Mitch beg Keegan to reconsider, but it is only when the teenager reveals that it was Gray who put the idea in his head that all hell breaks loose.

Seeing red, Mitch storms round to confront his son-in-law and it’s not long before the pair go head-to-head.

It’s no secret that there’s no love lost between Gray and Mitch, and it seems that months of pent up hatred comes flooding out as the pair fight.

But, as the two men hurl insults at one another, it doesn’t take long for the fight to become physical.

Everyone is horrified as things turn ugly, but while Chantelle’s family are in the dark about her abuse at the hands of Gray, fans will know it’s likely the solicitor will later take his anger over Mitch out on his wife.

Is this the moment that Gray’s true colours are exposed? Or is this just another part of the secret that Chantelle is too terrified to tell?

What do you think of the Chantelle and Grey domestic abuse storyline? Leave us a comment on our Facebook page @EntertainmentDailyFix and let us know what you think!