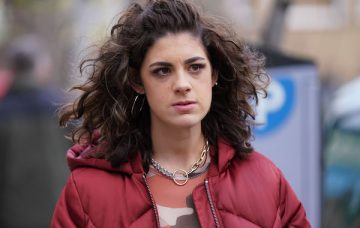 She is just playing a character!

Sophia Capasso gets some abuse from EastEnders viewers over her villainous character.

The actress has played evil Evie Steele on the BBC soap since November last year, and she admitted some fans seem to find it difficult separating her manipulative alter ego from the real person behind the part.

She told Metro.co.uk: “‘It’s been a big old mixture. It’s a fair to say that online, Evie gets a lot of hate and there’s been a little bit of hate for Sophia.

“I try to steer away from that and ignore it a bit. But the people who have come up to me on the whole have been very nice and are able to distinguish between myself and Evie. I think we are two very different people.”

So far, Evie has been seen pushing Tiffany Butcher (Maisie Smith) into a drug gang, while also threatening the likes of Bernie Taylor (Clair Norris) and Keegan Baker (Zack Morris).

However, Sophia has suggested the character is much deeper than viewers realise, and she is excited to reveal more as time goes on.

She added: “I think the key to her as an actor is not judging her. People obviously think that her behaviour comes from a bad place but she genuinely thinks that what she is doing is right and she can help Tiffany.

“That’s been fun seeing that side of her. Like every character who is similar to Evie, there is a bigger story behind them and I think it will be interesting to see if people will get that and what they think of that, should it come out.

“I think that redemption is possible for everyone, definitely. Who knows what the future holds? I really couldn’t say!”