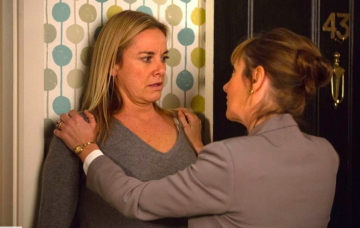 Hunter was seen holding a gun to his face in a shock moment that saw Mel hear a gunshot in her kitchen.

Since that episode more than two weeks ago, fans haven’t heard from them on the show and the storyline seems to have disappeared.

Viewers were vocal in their annoyance about the storyline being dropped so abruptly with no mention of where the mother and son killing duo had gone.

Hunter killed Ray to save his mother from being murdered, but it soon became apparent he enjoyed it more than he was letting on.

And now his actions are coming back to haunt the family when dead Ray’s other wives return demanding answers from Mel.

Confirming Mel’s return to Albert Square, she is attacked by Maddie and Nicola, who want to know what happened to the man they all married.

Mel is going to be left desperately trying to cover for Hunter and keep the two women away from the truth of what he did.

But it won’t be easy when she is thrown against the wall by them.

And there’s worse to come when Mel realises all is not well with Hunter as his erratic behaviour continues.

She doesn’t yet know Hunter kept the gun from the murder, despite promising her he disposed of it.

But with Hunter’s behaviour spiralling out of control and questions being asked – could he kill again?

Will Mel have to stop her son from killing Maddie and Nicola?

Or will he turn the gun on her?

Who do you think is Hunter’s next victim? Leave us a comment on our Facebook page @EntertainmentDailyFix and let us know what you think!