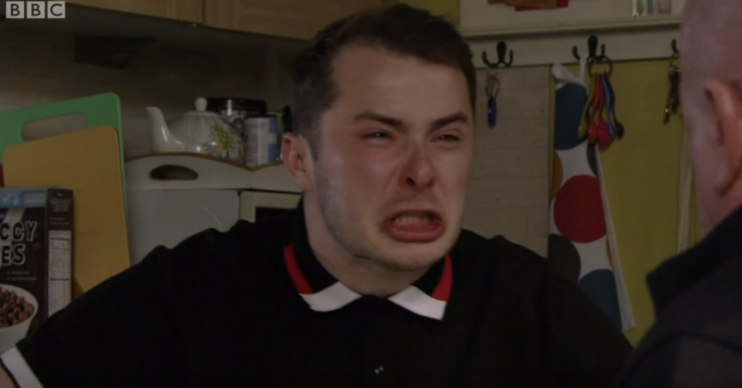 Fans have called for Max to win awards

Max Bowden, who plays Ben Mitchell in EastEnders, has praised on-screen dad Steve McFadden and revealed a secret behind the confrontation scene between Phil and Ben Mitchell.

In last night’s episode of the soap (August 20 2019), Kat lied to Phil about who hit him over the head – she took the blame for her cousin Stacey.

However, Kat didn’t hesitate in throwing Ben under the bus and saying Phil’s son witnessed the attack and told them not to call an ambulance.

Hearing what Ben had done, Phil bought bottles of vodka to make his son think he had gone back on the booze.

The pair soon went head to head as Phil told Ben he knew who attacked him and wondered why he had tried to pin the blame on Keanu.

He told Ben that he knows he saw Kat hit him and told them not to call the ambulance.

Ben admitted he did it to get back at Keanu for Phil putting him in his will and removing him.

Ben broke down in tears saying: “He ain’t even family.”

The two continued to argue as Phil had a go at his son for trying to pin the blame on innocent Keanu.

After Ben confessed everything – and the reasons why he did it – Phil told him to get out and that he never wanted to see his son’s “lying face” around Walford again.

After the episode aired, Max told how much he loved working with Steve – and revealed a secret behind the scene: it was shot in one take!

Thank you so much for the kind words of support towards this episode. @McGillTweet you’re a joy. Fun fact, that scene was one take.! Love working with Steve so much.

Fans have heaped praise on Max for his performance as Ben.

Some even said he deserved to win awards for the scenes.

You and Steve killed it! 👏 Great job all round!

One take. I’m in awe. Max has a ton of awards with his name on them! #eastenders pic.twitter.com/atKTS5RCpl

max bowden getting the praise he deserves for his portrayal of ben mitchell. it’s what he TRULY deserves! #eastenders.

Can we all agree to give Max Bowden all the awards#EastEnders pic.twitter.com/RuE2Wbawps

The episode ended with Ben visiting Kat and telling her he still had the wrench Stacey used to hit Phil.

He said: “Give Stacey my regards. If she knows what’s good for her, she’ll stay away.”

It looks like the feud is far from over for the Slaters and Mitchells.