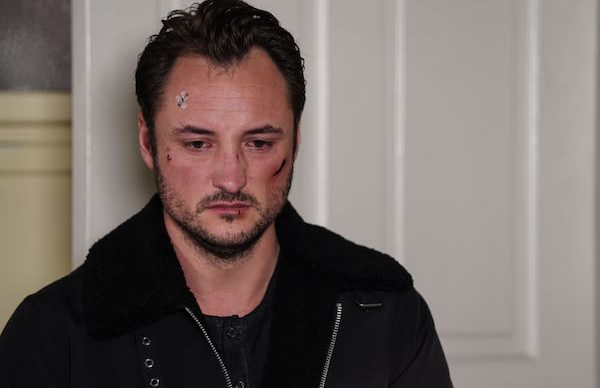 Martin's gone off the deepend!

Fans of EastEnders are in shock after a massive Christmas spoiler was leaked with Martin Fowler taking Linda Carter hostage at gunpoint.

Usually mild-mannered Martin looks bloody and bruised in the confrontation as he drags screaming Linda into a warehouse.

He holds a gun and looks angry as he forces Linda, dressed in a Santa costume, to go with him in the pictures in The Sun on Sunday.

Martin has become more and more of a villain over recent weeks after being blackmailed by Ben Mitchell over his wife Stacey’s attempt to kill Phil.

According to the newspaper only one other actor was present during filming the scenes – Danny Walters.

Read more: EastEnders fans convinced Phil WILL be Sharon’s baby’s dad after all

It reports a gunshot let out during filming meaning someone could be shot and killed in the horrifying situation.

On Friday Danny Walters, who plays Keanu, announced he was quitting the soap so could this be how he leaves?

He said in a statement: “It has been a joy to play Keanu Taylor for the last two and a half years.

“I have been blessed to work with the most fantastic creative team. I will miss them and my fellow actors immensely.

He wan’t joking about the devastating consequences!

An insider added: “Keanu should know that secrets never stay secret in Walford and he’s been playing with fire for months.

What do you think of the scenes? Leave us a comment on our Facebook page @EntertainmentDailyFix and let us know what you think!