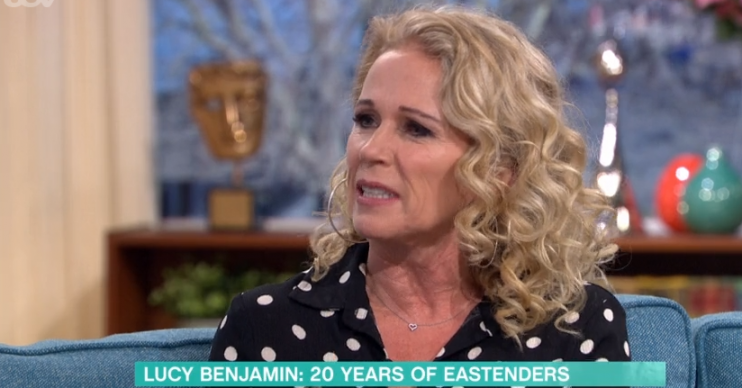 Lucy Benjamin, who plays Lisa Fowler in EastEnders, isn’t ruling out a return to the soap.

Speaking on This Morning today (January 8 2020) Lucy kept tight-lipped about Lisa’s exit storyline but spoke about whether her alter ego will ever return to Walford once she leaves.

Holly asked if the door would be left open for her to return and Lucy said: “I don’t know if I can talk about that.

“I knew I was going back for a stint and I’ve completed that stint.”

When co-presenter Phil asked if there could be another return in the future, Lucy replied: “Possibly. Lisa never seems to go away, she’s like a bad penny.”

Lisa returned to Albert Square last year as her daughter Louise and Louise’s fiancé Keanu had been staying with her.

During her return, Lisa’s best friend Mel Owen was killed after being hit by a lorry.

Before Mel’s death, she told Lisa that Phil Mitchell’s wife Sharon wasn’t pregnant with his baby.

As Sharon had been near the scene when Mel died, Lisa accused Sharon of killing Mel in an attempt to cover up her secret.

However Sharon privately confessed to Lisa that Keanu was the father of her unborn child and she managed to persuade her not to say anything to Louise or Phil.

But Louise, who recently gave birth to Keanu’s daughter Peggy, eventually figured out the truth and, with her brother Ben and Martin Fowler, set Keanu up to be kidnapped and killed.

Although Louise has forgiven her mum for keeping the secret from her, she is struggling with the constant reminders of the man who broke her heart.

But viewers know Martin didn’t kill Keanu and along with Linda Carter, helped him flee the country.

With Louise actress Tilly Keeper also leaving the show, we wonder what will their exit storyline be.