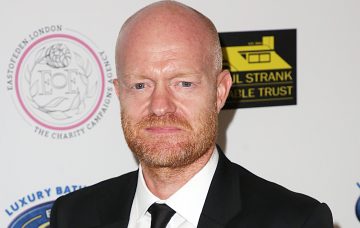 Jake Wood was left terrified on holiday when his wife was almost eaten by an alligator, according to reports.

The EastEnders star was enjoying a boat trip in the Florida Everglades with his wife Alison and their children Buster and Amber when she jumped out of the boat and was confronted with a huge alligator.

He told the Daily Star: “I almost lost my wife to an alligator in Florida.”

Describing the incident, he continued: “So I’m looking at it and thinking, ‘It’s got to be a log or something. Got to be a log’. All of a sudden it [bleep] goes down and I [bleep] see an eye. All the kids are screaming, I’m screaming, ‘Get back in the boat!’

Read more: Coronation Street: Is Alison King one of the best soap actresses?

“As soon as an alligator goes underwater you don’t know where it is, it was horrible. It was only about 15 feet away.”

Jake, 46, revealed shocked staff told them they should never have left the boat and called the alligator a “maneater”.

He also joked the 2014 incident had left his children permanently traumatised.

Jake took a break from the BBC One soap last year. He said at the time he loves the show but admitted he doesn’t see his family enough when he is working on it.

He explained: “I’ve been there 12 years and my approach has always been … two years ago I had a year off. I love being there, I love the job, but it is very demanding. It’s long hours.

“I’ve got a family, I’ve got two kids at home and a beautiful wife that I probably don’t see enough of.”

Jake previously took a year off from EastEnders to recharge his and his character’s batteries in 2015.