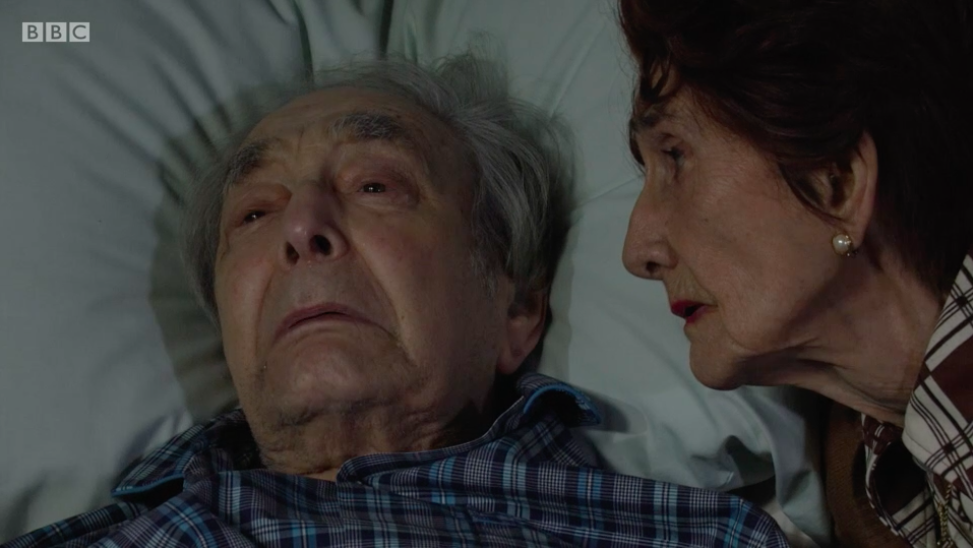 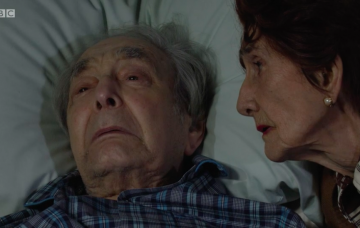 EastEnders fans have been left reeling after the tragic death of original character Dr Legg.

Beloved Dr Legg passed away in last night’s episode after telling Dot Branning how he was going to see his wife again for the first time in decades.

He told the heartbreaking story of how he first met his wife Judith when they were both teenagers fighting fascists on the streets of London.

“The police tried to clear the way for The Blackshirts to walk through but we wouldn’t let them,” he told her.

“They had horses, they were hitting people and that’s when I saw her. A couple of times she was hit but she got back up every time.”

Tearing up, he said: “I didn’t know who she was. I didn’t even know if she was Jewish. I didn’t care.

“I remember my father yelling at me to get away and come home to stay out of the fight.

“But he was wrong. It was our fight, it was everyone’s fight. It still is. It was as if she didn’t feel the blows.

“At least we didn’t run”
The touching final moments of the legendary Dr Legg. #EastEnders pic.twitter.com/SyApkNGmgW

“It was as if she gave me her strength too. Then the Blackshirts called it off and she turned to me and she was bleeding.

“She lent close and whispered in my ear, at least we didn’t run.

“I didn’t see her again for a few years but that’s when I knew, in that moment I was 16-years-old but I knew this was the girl I was going to marry. This girl who wouldn’t run.

“I asked for her name and she told me. Judith. And I kissed her and she kissed me back.

And as he began to fade and slip away, he said: “The most perfect kiss ever. What I would give…”

A heartbroken Dot told him: “Go and kiss her again.”

The gut-wrenching scenes left fans sobbing with one tweeting: “It was so distressing, I literally sobbed, it was incredibly acted but oh God.”

Another added: “For goodness sake….I’ve teared right up, good night Dr Legg, you served us all well.”

A third said: “Thank you @bbceastenders tremendous end to one of the most iconic characters ever. Thank you. And Thank you Dr Legg.”

What did you think of Dr Legg’s final scenes? Leave us a comment on our Facebook page @EntertainmentDailyFix and let us know what you think!