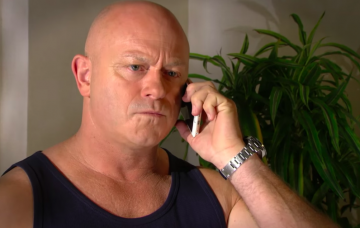 Next week is 25 weeks after Sharongate after all

Fans of EastEnders are convinced Grant Mitchell will be making a shock return next week.

In last night’s episode Phil made a bombshell return after his son Ben phoned him and revealed Keanu Taylor was alive – and he had kidnapped his boyfriend Callum Highway.

He thundered off a plane and made a phone call to a mystery man asking for a massive favour.

But who could Phil call to raise £100,000? Fans are convinced it was his brother Grant – and that he’s coming back.

One said: “Omg I think Grant is back in EastEnders next week… will be disappointed now if it isn’t.”

A second said: “IF Grant was to return at all next week that’d be quality and I’ll be even more overwhelmed than I am already #EastEnders #EastEnders35.”

A third said: “So who was Phil on the phone to on EastEnders??? Please be a surprise cameo from someone (cough Grant cough) #EastEnders.”

A fourth said: “I’m literally praying Phil was on the phone to Grant here, we need a BIG and surprise return for anniversary week and he would definitely fit the bill #EastEnders.”

Grant was last in Walford in 2016 for mum Peggy’s final days before having to leave and missing her take her own life.

He was seen secretly visiting her grave after deciding to not return to see the rest of his family.

The hardman had left Walford after forgiving Phil’s debt of the cash he used to help Kathy escape from her abusive husband Gavin.

Although Grant and Phil have not always seen eye to eye, their sibling bond is strong – and viewers love seeing them together.

Long-term fans of the BBC soap know that Sharon and Grant were married, before she cheated on him with his brother Phil in the explosive Sharongate storyline that will turn 25 next week to coincide with the 35th anniversary.

Do you think Grant will return for the special week of episodes? Leave us a comment on our Facebook page @EntertainmentDailyFix and let us know what you think!