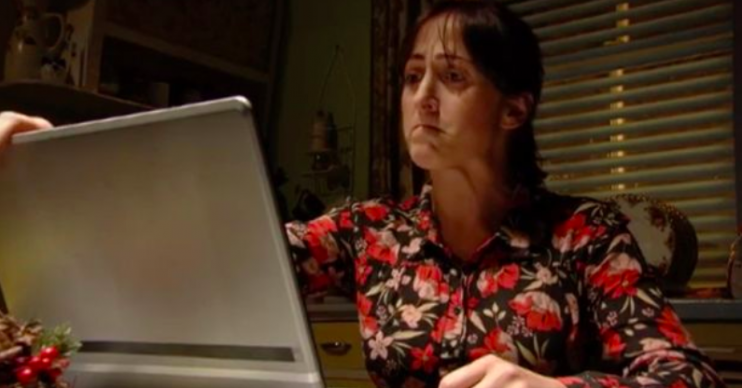 Sonia Fowler’s behaviour left EastEnders viewers feeling shocked to the core last night, when she was revealed to be the secret ‘scammer’ trying to steal from Dot Branning.

On New Year’s Day (January 1), the nurse was seen looking upset and tearful as she apparently hacked into Dot’s bank account – exposing herself as the mysterious thief who had been trying to steal £5,000 from Dot over Christmas.

And while some fans expressed their horror at the nurse for attempting to rob the OAP, others were convinced she had honest motives.

Did Sonia steal the money to help Martin out?

Throughout the episode, a flashback to Christmas Day’s climatic events, we saw Dot’s granddaughter Dotty desperately trying to discover who had tried to steal Dot’s money from her bank account.

At first, she accused Martin of taking the money after he failed to show up, but then her attentions turned to Stuart Highway and Rainie Cross…

However, fans soon started suspecting Sonia when she said she’d phoned Dot’s bank and contacted the fraud team. But the phone wasn’t even connected, and had been unplugged at the wall.

Towards the end of the episode, Sonia herself was exposed as the hacker who tried to rob £5,000 from Dot when she was seen logging out of Dot’s online accounts.

They said: “My guess is that the granddaughter is back on the scene so Sonia took the money out of the account to keep it safe until she is sure that Dotty isn’t pulling a ‘daddy scam’.”

Another agreed, typing: “I think she’s doing it to stop Dotty from getting her hands on it.”

A third had a different idea, believing Sonia was attempting to steal the money for her ex-husband Martin.

@bbceastenders Sonia took Dot’s money to pay for a flight for Keanu to go and live in Portugal, so Martin will fall back in love with her #EastEnders

Is it Sonia though or is she covering for somebody else.🤔

Also Sonia you could have just asked for the 5k from Dot. So I think she's covering. Either for Martin or Bex. #EastEnders

Was Sonia actually stealing, or had she found out that Martin had tried doing it, and decided to delete the evidence? #EastEnders

They said: “Sonia took Dot’s money to pay for a flight for Keanu to go and live in Portugal, so Martin will fall back in love with her #EastEnders.”

“I bet Sonia stealing the money is hush money for the victim of the hit and run,” suggested another, who pointed out that Sonia had said “sometimes good people do bad things but for good reasons” while at the victim’s bedside in the hospital.

One more wrote: “Did Sonia steal the money to help Martin out? He told her he’s killed someone and she loves him? Bet she ends up pregnant this year too.”

Others believe Sonia could easily have asked Dot for a loan, which is why they suspect she planned to steal for someone else.

“Sonia you could have just asked for the £5,000 from Dot. So I think she’s covering. Either for Martin or Bex,” said one, and another added: “Was Sonia actually stealing, or had she found out that Martin had tried doing it, and decided to delete the evidence?”

Many others soap fans were shocked to see that Dot had almost £1.2million in her bank account. Not bad for a laundrette assistant!

In fact, Dot had inherited a lot of money from Dr Legg when he left her his entire estate.

Is this the start of a new, darker side to Sonia‘s character? Or was she covering for someone else as some fans suspect?

Did you think Sonia was  capable of stealing from Dot? Leave us a comment on our Facebook page @EntertainmentDailyFix and let us know what you think!