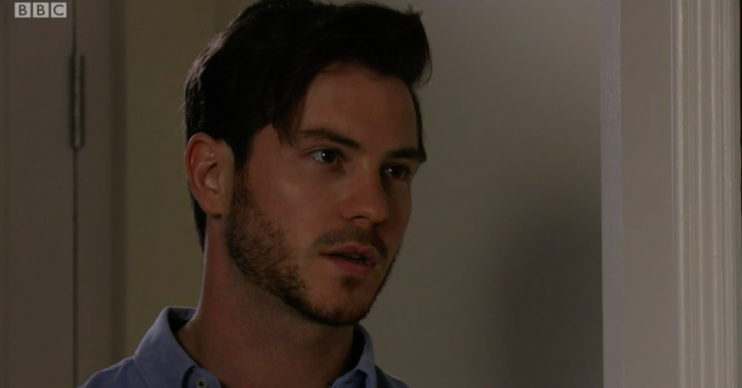 Gray is married to Chantelle!

Fans of EastEnders have predicted Gray Atkins will have an affair with Whitney Dean.

In last night’s episode of the soap (October 20 2019), Gray walked past Whitney’s market stall and she jokingly asked if her stuff isn’t good enough for him.

As the pair had a laugh, a shoplifter took an item of clothing off Whitney’s stall.

Luckily Whit managed to get her stock back and Gray joked the shoplifter picked the wrong woman to mess with.

Viewers think that the encounter could be a sign the solicitor and market stall owner will have affair.

Gray is definitely going to get onto Whitney! #EastEnders 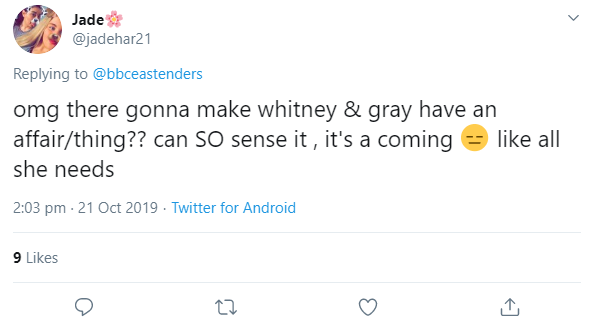 Viewers know Gray is married to Chantelle, however he’s abusive towards his wife.

He has physically abused her before, punching her in the stomach and even locking her in the house to abuse her, however he recently claimed he wanted to change as they discovered she’s expecting their third child.

But it looks like that will end in heartbreak as Chantelle has lost the baby.

Read More: Soap stars and fans come out in support of Katie Jarvis

Meanwhile, Whitney recently ran out of her wedding to Callum Highway after he confessed he had cheated on her with Ben Mitchell.

When she went on what was meant to be her honeymoon alone, she met Leo.

Do I see chemistry?

However, Leo is not who he appears to be, as Whitney has no idea he is the son of paedophile Tony King – the man who groomed her from the age of 12 to 16.

Last week, her sister Tiffany became suspicious when Whitney told her she met Leo on holiday.

Tiffany had already had an encounter with Leo outside the wedding venue and saw him again on Albert Square later on.

Her suspicion caused an argument between the sisters but the pair made up and Whitney decided she wasn’t ready for another relationship.