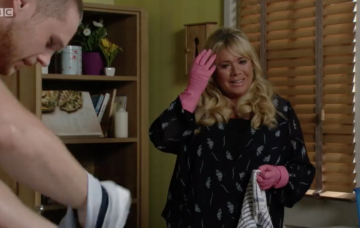 Phil asked him to "have a look at her sink"

The much younger mechanic was asked by Sharon’s husband Phil to help her unblock her kitchen sink on last night’s episode.

But, as the businesswoman stood over Keanu with a plunger to clear the blockage, he got soaked and had to remove his top, much to Sharon’s obvious delight.

She told him: “It’s like one of those 1970s films, Confessions of a Housewife and a Handyman.”

Viewers couldn’t believe their eyes and took to social media as they laughed at the hilarious moment.

One wrote: “Sharon & Keanu are giving us their take on Mrs. Robinson & Benjamin in ‘The Graduate’.”

A third added: “Sharon trying to flirt with Keanu she’s like a kid in a sweet shop the eyes I want what I see.”

Sharon & Keanu are giving us their take on Mrs. Robinson & Benjamin in ‘The Graduate’. #EastEnders

Nah Sharon really felt the vibe with Keanu topless in her kitchen. I thought he was going to even peak up her skirt when under the broken sink. 😂😣🤣 #EastEnders

Keanu “Phil wants me to have a look at your sink”

The pair are set to embark on a shock affair in upcoming episodes.

They have been flirting for months but a secret romance is on the cards.

And we all know exactly how Phil will react if he finds out.

* EastEnders airs Monday and Friday at 8pm and Tuesday and Thursday at 7.30pm on BBC One.

What did you think of Sharon and Keanu’s scenes? Leave us a comment on our Facebook page @EntertainmentDailyFix and let us know what you think!