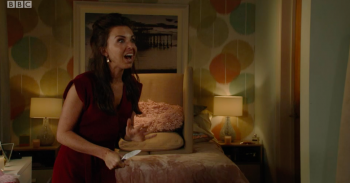 Viewers said it was like something out of American Psycho

EastEnders fans were horrified last night when Ruby Allen tried to cut off her rapists privates.

She drugged Ross with the same date rape drug he had used on her and prepared her revenge.

Ranting at him she told unconscious Ross: “I can’t jump you on a dark night, can I? Pin you down, take advantage and smash your face in. No because look at the size of me. We weren’t exactly evenly matched, were we?

“I can’t put you in my car like a blow up doll. So once this is done I’m going to have to leave Ross, which is a bit wrench for me because I don’t have many friends.”

She added she had considered tattooing the word ‘rapist’ on his head, or carving it onto his chest.

But her real plan soon became clear as it emerged she had covered her living room in plastic bags.

“How dare you rape me?” she screamed at him.

Tearful Ruby added: “There’s only one thing I can do to make sure you never ever hurt a woman the way you hurt me.”

But as she prepared to use the knife to cut off his privates, Martin and Stacey managed to get into her flat.

Stacey walked in just as Ruby was undoing Ross’ trousers ready to carry out the deed and Martin shouted: “Ruby, you can’t cut his bits off.”

Holding the knife around, Ruby insisted she had to do it and told them both: “If I want any sort of justice I have to get it myself on my own.

“I’m not standing up in that court and being called a liar. I’m jot a liar. he owes me.”

Stacey then promised to help Ruby carry out her revenge attack, and viewers were completely shocked.

One said: “Omg the Ofcom #Eastenders are gonna get for a horror movie scene where Ruby is about to do a whole castration at 8.10”

A second said: “Ffs I know #EastEnders is a soap and it’s not real but this gangster Ruby is gone beyond it.”

A third said: “Just saw 5 minutes of #Eastenders for the first time in years and some birds trying to cut some blokes [expletive] off in a plastic bag covered Patrick Bateman style room!! Wtf BBC???”