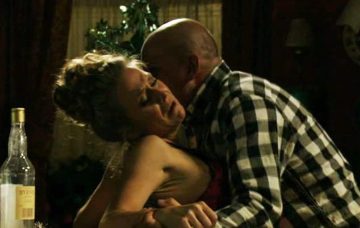 But they loved the huge twist in the explosive two-hander episode...

And, after convincing him she had feelings for him, the truth finally spilled out in epic scenes last night (Thursday 13 December).

Read more: EastEnders SPOILER: Hunter is set up by Jack Branning and arrested by police

Viewers watched the two-hander with eyes on stalks as Linda seduced Stuart in an attempt to draw a confession out of him – that Mick didn’t really shoot him.

However, a suspicious Stuart realised things were too good to be true and searched around the bedroom when she popped away, eventually finding her recording device hidden behind the bed.

Furious that he’d been duped, a horrific and violent showdown began which left viewers hiding behind their cushions, and fearing for Linda’s life.

In tense scenes, Linda told Stuart what she really thought about him, leading him to threaten her violently.

As he held her up against the bar, there was a real fear that he could rape her.

But, in a brutal turn of events, Linda grabbed a nearby bottle and smashed it over Stuart’s head.

As the violent altercation continued, Linda got what she wanted – Stuart revealed the truth that Mick didn’t shoot him.

After Stuart left the pub with a sore head and bruised ego, fans were thrilled to see the pub landlady pull a recording device out of her hair and plug it in to a nearby laptop… Yaaaaaaaasssssss!

While she has got one up on the villain, BBC fans know that unpredictable Stuart will now be on the war path.

Despite the victory, Linda was left exhausted and traumatised by the scenes – as were the soap fans.

With some even shocked they were allowed before the watershed.

One said: “#EastEnders is far too nasty for before the watershed.”

wellllll this is a bit much for 7:30!! #EastEnders

#EastEnders is far too nasty for before the watershed @bbceastenders

Is this Eastenders not a bit too much before the watershed? 😳 #eastenders

.@BBCOne @bbceastenders #eastenders what happened to the #watershed? Children will tonight have watched violence, abuse, sex and think it’s normal behaviour. It is not. I’m horrified and very angry. Very.

A third fumed: “@BBCOne @bbceastenders #eastenders what happened to the #watershed? Children will tonight have watched violence, abuse, sex and think it’s normal behaviour. It is not. I’m horrified and very angry. Very.”

Others were mesmerised by the episode and praised the writers and actors – Kellie Bright and Ricky Champ – for their performances.

A fan wrote: “Amazing acting tonight so powerful and emotional to see all the turns and twists.”

Amazing acting tonight so powerful and emotional to see all the turns and twists #EastEnders pic.twitter.com/ainCZwE77T

One of the best episodes of @bbceastenders in a long while, gripping viewing with a twist – love it!#EastEnders

Another added: “Fantastic twist I think Linda and Mick have really come into their own with this Stuart story.”

“What a [bleep] twist and a half. The perfect @BBCEastEnders #DoofDoof tonight. A flawless episode. Not even I can fault it,” commented another.

Others called it “one of the best episodes of @bbceastenders in a long while” and “brilliant” to see Linda playing Stuart.

We already know Mick is back in Albert Square soon… But where does that leave Stuart?

It’s not over yet, that’s for sure!

What did you think of the two-hander Stuart and Linda episode? Leave us a comment on our Facebook page @EntertainmentDailyFix and let us know what you think!