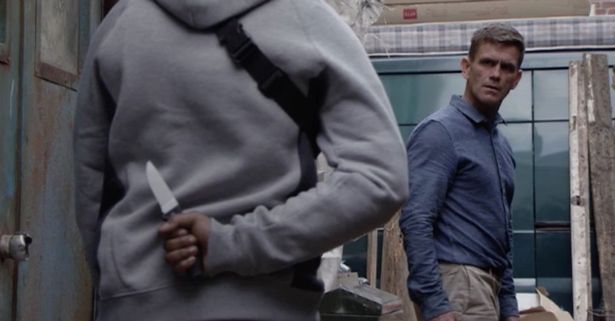 EastEnders fans gripped as Jack Branning is stabbed and robbed

The fan favourite played the hero - but it had consequences

BBC EastEnders took Jack Branning fans on a rollercoaster ride of emotions last night, as he found himself in a very dangerous situation.

By doing the right thing, or trying to at least, he got hurt – and suffered the consequences.

Former cop Jack confronted the rapist in an alleyway, unaware that Fraser had a knife on him.

Despite several warnings to “go home”, Jack held his ground and told the young hoodlum to leave the Square and never return…

When Jack cornered the drug dealer in an alleyway and revealed he knew his identity, he shoved Fraser up against the wall.

Fraser seemed genuinely scared, as Jack yelled: “She was a kid and you took that away from her. You come back here I’ll kill you. Do you hear me?”

In a bid to escape, Fraser knifed Jack in the shoulder saying: “I told you this wasn’t going to go how you wanted it to.”

He then crossed a line when he goaded Jack by claiming his niece was “nothing special” and that he would come back for his daughter Amy when she “grows up”.

Letting his anger get the better of him, Jack lost control and repeatedly punched his nemesis in the face.

During the special 9pm post-watershed episode, Jack shouted: “How brave are you now, hey? How does it feel?

“Do you know how many blokes I know who would take you apart for fun? Just one call. But why give someone else the pleasure.”

He also threatened to cut off Fraser’s private parts if he ever returns to Walford.

Unfortunately things got even worse for Jack, when Rainie stole his life savings before kidnapping baby Abi and leaving the Square in a taxi.

When Jack returned home, Rainie and Mel were shocked to see the state he was in and the incident prompted her to flee.

Fed up with feeling like an outsider, Rainie seized the opportunity to start a new life away from Walford and take revenge on Max at the same time – using the £75,000 she had stolen from Jack to fund her getaway.

After emptying Jack’s bank account, Rainie hurriedly packed some bags and headed out of the house with Abi before anyone could notice they were gone.

What a good episode tonight was, what a man jack is 👏 @RealScottMaslen #Eastenders #bbc

It is sweet of Jack how he has been looking out for Tiffany!👍👍@bbceastenders #EastEnders

Go onnnnnn Jack get him!! #EastEnders

Fans were gripped by the evening’s double episode, with one tweeting: “What a good episode tonight was, what a man Jack is.”

Another said: “We all need a Jack Branning to scare em #EastEnders.”

A third added: “OOOOOOOOOOOOO Rainie he’ll find you and he’ll keeeeeeeeeelllllllllll you.”

And so begins a story arc in which Rainie goes on the run with her husband’s granddaughter Abi – but will Max and bro Jack catch up with her?

Are you team Max/Jack or Rainie? Leave us a comment on our Facebook page @EntertainmentDailyFix and let us know what you think!