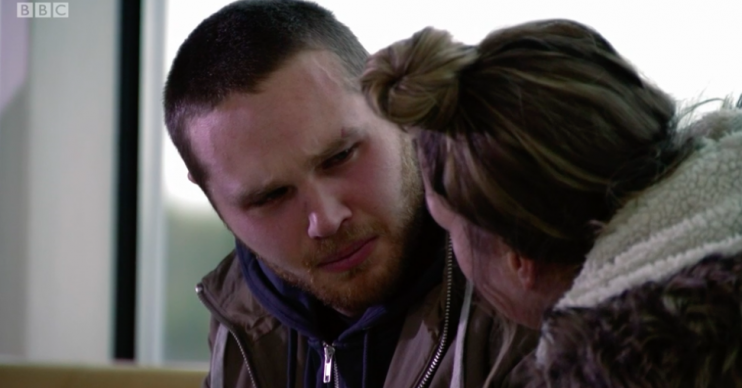 The mechanic faked his death over Christmas

Mechanic Keanu had his death faked by Martin and Linda Carter after Ben Mitchell tried to force Martin into killing his enemy.

But the weight of knowing what really happened has been getting to Martin and earlier this week, he told Keanu’s devastated mum Karen that her son was alive.

However, Karen didn’t believe Martin and last night confronted him.

She said: “Mitchell, how do I know he ain’t put you up to this? How do I know my boy ain’t lying dead somewhere in a ditch?”

Martin was forced to reach out to Keanu on his phone and arrange a meeting for mother and son.

And Keanu was grateful to Martin for letting him survive, telling Karen: “The Mitchells gave him no choice. He’d have been a lot safer if he had killed me, mum. I owe him my life.”

Karen was left shocked when Keanu told her how Louise and Ben were involved too and that he had no future left in Walford.

He vowed revenge: “I promise you this, one day they will all get what’s coming to them but, until then, I need to disappear. I’m not saying things won’t change in the future, but for now, this is just the way things need to be.”

He added: “Don’t you ever think that you let me down. You’ve always been there for me, through thick and thin… You’re the best mum. I mean that.”

However, despite a small scene claiming Keanu had got a fake passport and a new identity since faking his death, viewers were still confused at how he was going to get through airport security.

I thought Keanu’s passport was burned by Martin .. lol they’re at an airport #EastEnders

Hang on have i missed something #eastenders i thought martin burnt keanu's passport? Hows he managing with no id ,passport or money!i dont get it ,can someone explain what ive missed??

One asked: “How’s Keanu getting on a plane when Martin burned his passport?”

A second said: “I thought Keanu’s passport was burned by Martin… lol they’re at an airport.”

And another fan said: “Keanu’s passport was set on fire by marring #Eastenders @bbceastenders big bloopers there.”

Do you think Keanu will return for revenge? Leave us a comment on our Facebook page @EntertainmentDailyFix and let us know what you think!