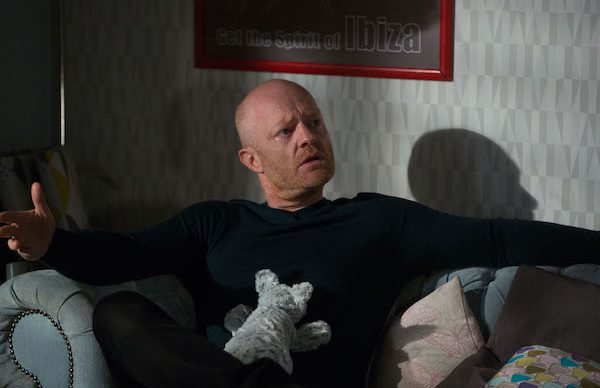 Lothario Max Branning may have remarkably little trouble attracting the ladies in Walford, but many EastEnders viewers have fallen out of love with him.

In fact, Jake Wood’s character appears to have become so unpopular of late, that there have even been calls to have him axed.

Most recently, the more unhinged Branning brother has been thrown into a spiral of depression after wife Rainie kidnapped his granddaughter Abi and went on the run with her.

Drinking hard, and missing his absent family, he’s been in a pit of despair.

And soap viewers appear to have little sympathy…

Read more: EastEnders fans slam level of violence in soaps as Martin and Phil both get attacked

His relationship with Ruby Allen hasn’t helped, with soap viewers calling the coupling “cringe” and “random”.

Now, writing on Digital Spy Forums, one reader has suggested the character is KILLED off for the soap’s upcoming 35th anniversary next year.

He wrote: “Does anyone else think it’s time they killed Max off in EastEnders? Maybe for the 35th anniversary?

“As much as I think Jake Wood can pull it out of the bag, the character is just on a complete merry-go-round of repetitive stories.”

The fan continued: “If EastEnders can kill off Pat, Ronnie and Roxy – who I believe had more steam left in them – then why not close the door on that era of Brannings?

“Abi is dead, Tanya isn’t coming back and there really is no need for Lauren without Peter.”

Another forum user agreed, saying: “Yeah, I agree. Max has no chance of redemption in my eyes and is a joke of a character in my opinion. He is just boring and has run out of steam, so killing him off is a good idea!”

Another tweeted: “Can we just kill Max Branning off now, please?”

“Max should have fallen off the roof instead of both sisters,” said one more.

However, one less bloodthirsty fan, wrote: “I have no interest in seeing Max killed off. No one in Walford aside from Stacey would even care. The show has enough death as it is.

“I would have him leave with another new wife and a baby on the way, which everyone, including Max deep down, would know would never change who he is, but he decides to try anyway.”

Others weren’t so harsh, hoping the character stays but with new storylines.

One typed: “It’s a sign of a soap running out of ideas if they keep killing people off.

“Jake Wood is a great actor but his storylines are dull. Maybe the storyliners should think of something interesting for him to do.”

Do you want to see Max Branning killed off? Leave us a comment on our Facebook page @EntertainmentDailyFix and let us know what you think!