EastEnders fans have revealed a secret wish - they want Whitney Dean and Mick Carter back together again!

Viewers know that Mick and his then daughter-in-law (awks!) Whitney embarked on an affair in 2017.

Do you think they make a good couple? (Credit: BBC)

After months of lingering looks and undeniable chemistry, the pair finally shared a passionate embrace - but it was short lived as they realised they couldn't hurt Linda like that.

When Linda eventually found out the truth, she was devastated. But the married couple have stuck together through thick and thin.

This week, the BBC soap announced that Linda will battle alcoholism in an upcoming storyline.

And some ruthless fans want Mick to find solace in the arms of Whitney! 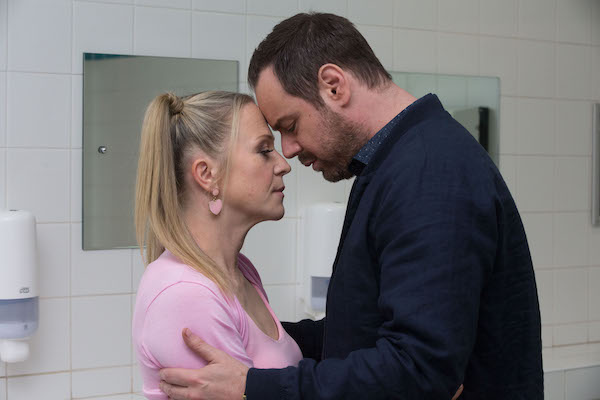 Linda and Mick are about to face one of their toughest trials yet (Credit: BBC)

Writing on Twitter, one fan said: "Definitely Mick and Whitney need to get it back on. So much chemistry."

Definitely Mick and Whitney need to get it back on. So much chemistry.

Another added: "I still think Whitney and Mick make a better couple than their current ones #EastEnders."

A third said: "Thank you to Jon Sen and Kate Oates for the past two episodes where we've had Mick and Whitney mentions.

"Seriously hope you guys somehow bring Mick and Whitney back together again. I'm massive fan of them, along with loads of other Mickney fans."

@jonarthonsen Thank you to you and kate Oates for the pass two episodes were we’ve had mick & Whitney mention. Seriously hope you guys somehow bring mick & Whitney back togther again I’m massive fan them along with loads other mickney fans 😁🙏🏻 #Eastenders

Definitely mick and Whitney need to get it back on, so much chemistry

And mick will confide in whitney I hope

And Mick will seek solace with Whitney.

Of course Whitney was set to marry Callum this week, but she called the wedding off after realising her fiancé had feelings for men.

While EastEnders viewers were sad that Whitney didn't get her happy ending, many are hoping for Callum to get together with bad boy Ben Mitchell.

But Mick is married - will he stray again?

Do you want Whitney and Mick to get together? Leave us a comment on our Facebook page @EntertainmentDailyFix and let us know what you think!