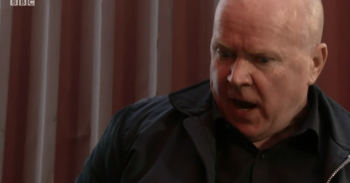 Phil was shot in a 'whodunnit' storyline in2001

EastEnders fans have accused the soap of recycling storylines as Phil Mitchell is attacked with his life hanging in the balance again.

Phil, played by Steve McFadden, cut his son Ben out of his will in last night’s episode and has given what would have been his shares to his employee and daughter’s fiancé Keanu.

While Phil is happy to have Keanu added to the will, he has no idea his employee had an affair with his wife Sharon.

The mechanic, who is father of his daughter Louise’s unborn baby, recently slept with Sharon again when Louise had ended things with him.

After Louise and Keanu got back together, Sharon also found out she was expecting, but who’s the father?

In a 30-second teaser for the show, Ben doesn’t look happy as he looks on at the Arches, while Phil and Keanu can be seen arguing in the street.

At the end of the trailer Phil is seen on a stretcher and will be left fighting for his life after a row with an E20 resident.

However, viewers aren’t impressed and think this storyline is recycled.

Anyone else bored with recycling of story lines on #Emmerdale #Eastenders and #Corrie? It's like WWE but with less Roman Reigns!

Back in 2001, Phil was the main character in one of the soaps biggest ‘whodunnit’ storylines – Who shot Phil Mitchell?

In the storyline viewers saw Phil shot on his doorstep on the evening of Steve and Mel Owen’s wedding.

Earlier in the episode, Ben’s half brother Ian ahad threatened Phil but nothing came of it.

It was soon revealed that Phil’s ex-girlfriend Lisa Shaw, mother of Louise, was the culprit.