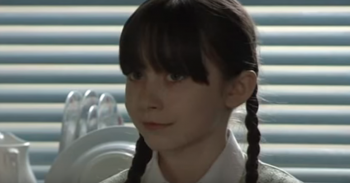 Dot Cotton’s wicked granddaughter could be on her way back to Walford to swindle her newly-minted nan, soap fans reckon.

Rumours of a comeback for Nasty Nick’s lovechild – who has not been seen on screen since she departed the soap in 2010 – have gathered pace after she was referred to in an episode last week.

And although Dotty was partially redeemed when she turned on her no-good dad and foiled his plot to poison his legendary ‘Enders mum, some viewers are convinced that Dr Legg’s money could turn her head back to the dark side.

Dot, played by 92-year-old June Brown, recently inherited millions from her old pal after he passed away – and Friday’s script included a mention about wanting to treat Dotty.

If Dotty does return, viewers may be left doing a double take to ensure their eye aren’t deceiving them.

That’s because nine years has passed since actress Molly Conlin was last in Walford – and she’s now 18!

Molly – who has also made appearances in CBBC’s Horrible Histories and The Omid Djalili Show – has wowed her thousands of followers on Instagram with selfie’s showing her honed make up skills and other pictures highlighting her super-fit figure.

“They should bring back Dotty,” tweeted a supporter last week.

“EastEnders will never top evil Dotty pushing Tiffany in a bin or trying to kill her gran. Can they bring her back?” another pondered.

Another concerned viewer added: “Dot being a millionaire is really dangerous for her health.”