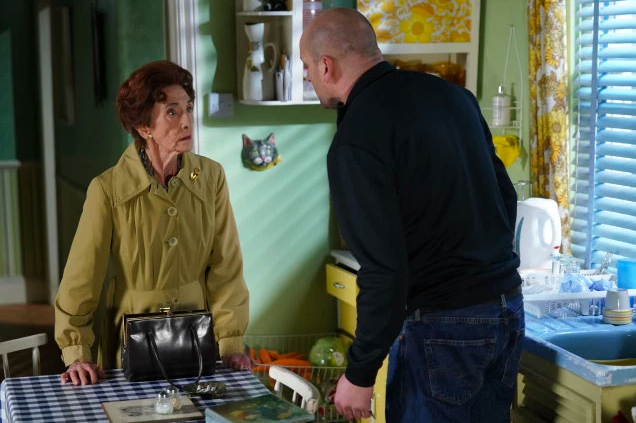 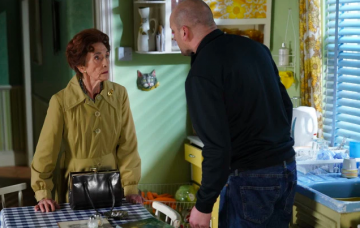 EastEnders Dot Cotton and Dr Legg to be killed by Stuart Highway?

Stuart has got more victims in mind

Having moved in with Dot Cotton after Mick Carter took violent revenge on him and beat him to force him to leave Walford, Stuart has tried to get his feet under the table.

But when Dot brings Dr Legg to stay with her in his final months, Stuart is left jealous and bitter.

He begins his usual tricks with the kindly former doctor in an effort to drive him out.

When his unsettling behaviour begins to seriously worry the doctor he confides in Dot about what Stuart is doing.

Spoiler pictures released by the show have revealed the moment Dot confronts Stuart about his behaviour.

The pair have a tense looking conversation as she lays out the law to him.

Demanding he leave her house, Dot is resolute that Stuart’s time at her home has come to an end.

But has she bitten off more than she can chew with Stuart and how far will he go to keep his cushy place in Albert Square free from interference?

Dot has always tried to see the good in people, even her truly evil son Nasty Nick, although fans will remember she helped him die as part of the show’s 30th anniversary week.

And now there is no telling how Stuart will react to Dot’s demand he leaves.

Read more: EastEnders make joke about their own ‘back from the dead’ plots

Fans will be terrified he is going to kill either Dot or Dr Legg, especially after all he has done to the Carter family.

It has already been confirmed Dr Legg will die this year with some legendary ‘Enders characters returning for his funeral.

But will he die a natural death or will he be murdered by Stuart Highway?

Do you think Stuart is going to kill Dr Legg? Leave us a comment on our Facebook page @EntertainmentDailyFix and let us know what you think!