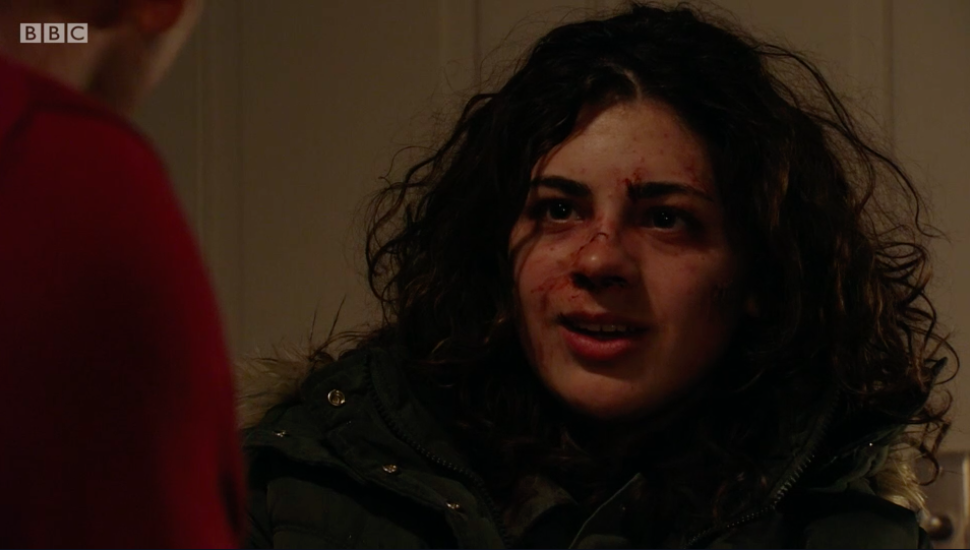 Evil Evie Steele has left EastEnders and viewers couldn’t be happier about it.

The drug dealer was given a place in witness protection last night by Jack Branning’s police mates after agreeing to reveal the names of all the dealers above her.

She was found badly beaten earlier this week with a brainwashed Tiffany desperately trying to protect her.

It was only after Jack convinced his great-niece that Evie was bad news and needed real help that Tiffany agreed to help convince her to turn on the other dealers.

Spotting worrying bruises on Tiff’s wrists, Jack took her to one side and told her how grooming works to make her see that’s what happened to her.

He said: “Don’t tell anyone, is that what they told you? You met them I’m guessing on the street, in the park, or maybe at the chicken shop.

“It was a boy at first, giving you all the chat. Then you met this one, pulled you in a bit closer, bought you little presents. And you felt good. And then they asked you to do a little favour.

“You thought you’d do it again, get in a bit deeper even though you knew you shouldn’t but they’re your mates, and they’ve got your back.

“Then what – you lose some gear or didn’t sell it for enough so they give you another job, a bigger one, to pay it off.

“This is what they do, kids like you. It goes on and it won’t stop.”

Tiffany begged him to help her stop it and said she wanted out so Jack took action and arranged for Evie to go into witness protection in return for her testimony on the drugs gang.

But Jack made it clear that Evie was to leave Walford and never see Tiffany again.

Jack told her: “Tiff ain’t part of it. You don’t see Tiff again, you don’t see each other again.”

And as she made her way into the waiting police car for her new name and new life elsewhere, viewers cheered with joy that her reign of terror was finally over.

You don’t know how lucky you are, it wasn’t just the one day you were my mate all the way through.”

One said: “Bye bye Evie see ya babe! Glad to see #Eastenders cleaning out the trash.”

A second said: “As long as Evie is off our screens I don’t really care where she has gone as for Tiff just a shame she didn’t go too.”

A third said: “I hope that’s the last we see of Evie #EastEnders”

Are you glad to see the back of Evie? Leave us a comment on our Facebook page @EntertainmentDailyFix and let us know what you think!