Bronson the dog regularly gets aroused on the EastEnders set, and he took a particular liking to Tilly Keeper.

Letitia Dean - who plays Sharon Mitchell on the BBC One soap - has revealed the Walford woofer is always feeling in an excitable mood when he is filming scenes on Albert Square.

She claims the chirpy canine is a "big beast", and he used to feel particularly pleased for himself when he was around Tilly, who previously played Louise Mitchell. 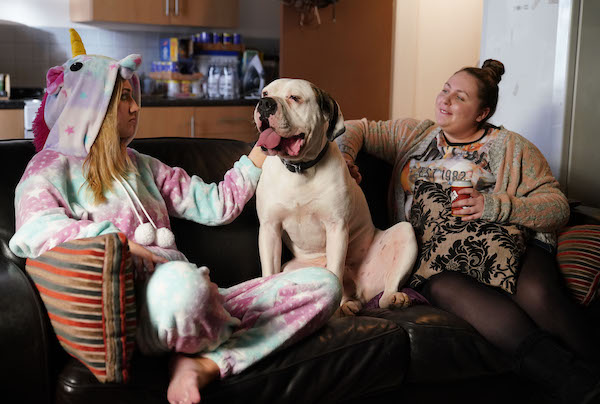 She explained to Heat magazine: "That big beast is always getting an erection, apparently - he loved Tilly Keeper!"

Letitia believes the soap's writers should pen a plot in which her alter ego joins the Salvation Army, and says Karen Taylor (Lorraine Stanley) and her animated animal Bronson could support her character.

Speaking about whether she could ever see Sharon's 1980s group The Banned - who were also made up of EastEnders characters Ian Beale (Adam Woodyatt), Simon Wicks (Nick Berry) and Kelvin Carpenter (Paul J. Medford) - getting back together one day, Letitia told the magazine: "I enjoyed it - from what I remember.

That big beast is always getting an erection.

"I think it's safe to say it's very unlikely there will be a reunion.

"Maybe when Sharon gets a storyline that she's joining the Sally Army [Salvation Army].

"She could be outside Walford Tube with Karen - Lorraine Stanley, who I'm a massive fan of, she's one of my besties - and Bronson the dog." 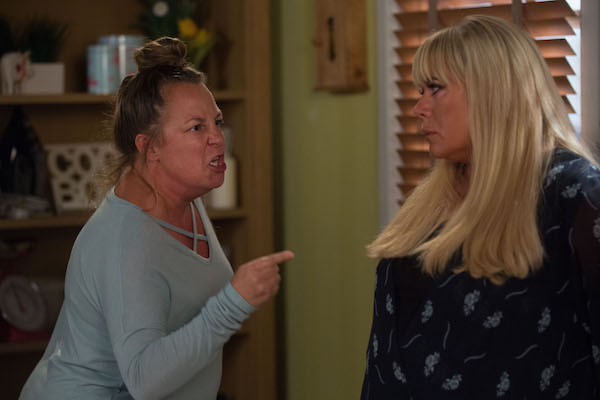 At war on screen, but besties in real life (Credit: BBC)

Despite being married to Phil Mitchell (Steve McFadden), Sharon's latest romance saw her indulge in an affair with younger man Keanu Taylor (Danny Walters), whose baby she is due to give birth to any day at the age of 50.

The 52-year-old star admits she had plenty of people telling her she was a "lucky [bleep]" and that she agreed she was "lucky" with the leading men she's been cast alongside.

Letitia and Danny had to film numerous saucy scenes during Sharon and Keanu's affair, including one when they hooked up on the kitchen table, and the actress admits Danny was "very respectful to the older lady".

When asked about the scene, she added: "With the leg up? Yes! I had to dig deep to remember what that was like, I can tell you.

"With the chauffeur's hat...

"I'm living vicariously through my character."