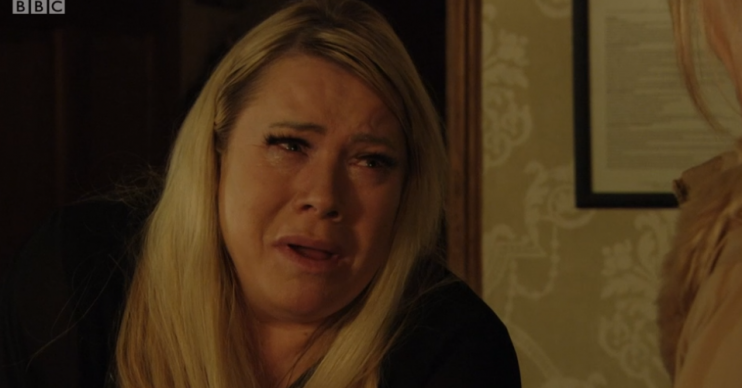 Could her son and her newborn die?

Fans of EastEnders have been left reeling after predicting Sharon will lose both her son Dennis, and her unborn baby, during the epic 35th anniversary episodes.

Read more: EastEnders bosses ‘argued over who should die during 35th anniversary’

Bobby, who has been attacked, is lying in a hospital bed fighting for his life, and Ian wanted revenge.

Tracking Dennis down to the boat party, he confronted the teen, who answered back and kneed him in the groin.

Ian dragged him to the lower deck and locked him in the staff changing room.

But when the boat crashed and water started to fill up, he went to rescue Dennis.

However, Ian dropped the keys and couldn’t get into the room and as the lights went out, he turned to leave terrified Dennis…

Meanwhile, back on the Sqaure, Ben had Sharon held hostage at the funeral parlour and she had just gone into labour.

Kathy arrived to help her give birth, but Sharon was terrified.

Kathy assured her: “In a couple of hours you’ll have everything you’ve ever wanted: Dennis and this little one.”

Hmm, could that be foreshadowing that everything WON’T be okay?

Fans watching were terrified, thinking Sharon may lose both her son and her newborn baby.

Is sharon about to lose Dennis an her baby 🤔 #eastenders

Loving the episodes so far this week. I think the three deaths will be Leo, Sharon’s unborn baby and Dennis 💔😪 #EastEnders

If Sharon loses Dennis and her baby…. 😭#eastenders

I am very worried that this is foreshadowing that either Dennis or Sharon’s baby won’t survive #EastEnders pic.twitter.com/oKE8XcMJOD

I have a weird feeling that Denny is gonna die and Sharon’s baby will be still born. I’m probably wrong but I feel like Eastenders really are that mean

It wouldn’t go down too well if Denny dies , and Sharon loses the baby #EastEnders

Read more: EastEnders 35 most iconic moments in its 35 year history

EastEnders has confirmed at least one major character will die during the week’s 35th anniversary celebrations.

And viewers listening closely last night will have heard the emergency services operator at the start of the show saying there were “two suspected fatalities” at the scene of the boat disaster.

Sharon isn’t on the boat, so perhaps her life is safe…

But what about Dennis? Will Ian get him out?

Or is Sharon set to lose everything?