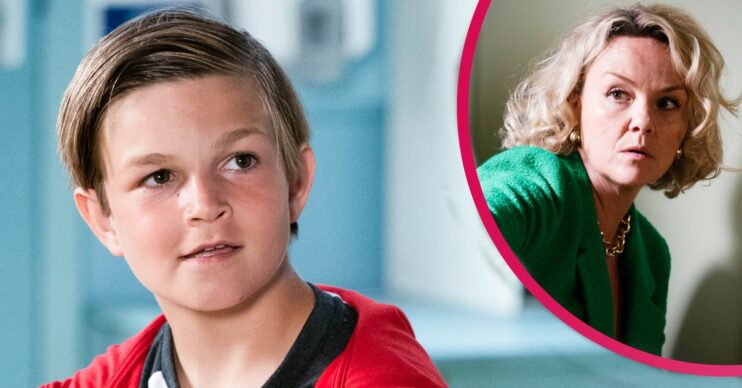 EastEnders: Will Tommy die after falling out of a top floor window to escape deadly fire?

Is Tommy going to be okay?

In tonight’s episode of EastEnders (Tuesday, September 13) Tommy, Scarlett and Janine got caught up in a fire at Phil Mitchell’s house, but will Tommy die?

Recently Janine Butcher returned to Walford. Both she and Kat Slater are trying to get custody of Janine’s daughter Scarlett, who also happens to be the half-sister of Kat’s son, Tommy.

After the judge adjourned the court hearing, to give both women a chance to prepare more, Scarlett was taken back into foster care.

Kat later got a phone call from a social worker to explain Scarlett went missing. At first Kat thought Janine took Scarlett and fled. But it soon became clear Janine had no idea where her daughter was.

Kat went across London to see if Scarlett had gone to her friends, meanwhile Janine went to Phil’s,

What they didn’t realise was Tommy had been hiding Scarlett in his room.

As Janine went over to Phil’s, Tommy downstairs went to check on Phil, who he heard arguing with Shirley.

Tommy and Scarlett found Phil unconscious on the floor. Soon Janine came in and tried to get Scarlett to come with her, however Tommy refused and wanted to get help for Phil.

But as she tried to grab Scarlett, she got her jumper and threw it on the hob, without realising it was lit.

As Janine tried to get Scarlett out of Tommy’s bedroom, the fire began to spread.

In tonight’s episode, Tommy locked the three of them in his room and threw the key down a crack in the floor boards.

However Janine soon realised there was a fire and Tommy tried to get the key. Meanwhile Ben and Callum noticed the smoke and soon Phil came to and managed to get out of the house.

Firefighters were called, but Phil didn’t realise anyone else was in the house – thinking Tommy went out with his friends.

After retrieving the key, Janine tried to get all three of them out for the house by taking them down the stairs.

However when a huge flame erupted near Tommy he want back upstairs.

Scarlett managed to get out and Janine went back for Tommy.

Outside, Scarlett told Kheerat and Gray that her mum and brother were inside the burning house and they went in.

As Janine tried to help Tommy climb out of the window, the flames reached a gas cannister causing an explosion.

Janine was pulled back and Tommy was left hanging from a top floor window. His family and neighbours were horrified when the 10-year-old fell to the ground.

Jean desperately tried to contact Kat and she returned as Tommy was being loaded into the ambulance.

But will Tommy make it?

It has not been revealed whether Tommy will make it, however it looks like he will be taken to hospital to be treated.

As Kat came along, she saw Janine by her son. She revealed that to Kat that she tried to save Tommy.

Will the two women put the past behind them? Will Janine still try to get custody of Scarlett?

Meanwhile Phil remembered Shirley hitting him over the head before the fire.

Shirley watched the scenes from across the street and broke down in tears. Does Phil think she started the fire?

EastEnders: Will Tommy die? Leave us a comment on our Facebook page @EntertainmentDailyFix and let us know what you think.