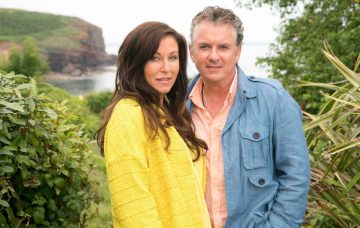 The six-part drama centred around Kat and husband Alfie Moon as they travelled the Ireland to track down Kat’s secret son, Zoe’s twin brother.

However it failed to bring in ratings and none of the dramatic events have been referenced in Walford at all.

This is despite Kat’s son turning out to be a killer priest and both Kat and Alfie being left for dead at the end of the drama.

Now actor Shane Richie has confirmed the show will finally deal with what happened in Ireland, years after the show aired.

He told press: “When we came back, there was talk about ‘Do we back reference the whole Ireland thing?’

“There were certain people that didn’t think we should, but I kind of felt we have to.

“Of course, we did one series.

“It was always going to be one series we were led to believe and then we’d come back to EastEnders, but of course the show was never as big as they thought it was going to be, personally because I think Redwater sent out mixed messages.”

He added: “But we do talk about certain characters.

“There’s a scene where Kat and Alfie talk about Dermott – he is mentioned and his name is.

“So those that have watched will see the link there. And to not mention it, it just seemed a bit silly, so we do.”

However Shane did admit the show won’t delve too deeply into what happened.

He said: “We don’t harp on about it because of course at the end of Redwater, Alfie was flatlining, Kat had been eaten by a whale or something.

“But there was a lot of time that passed. And then we talk about the history of where Kat and Alfie have been in Spain.”

So it seems viewers will finally have answers about what happened after Ireland.

Are you glad EastEnders will finally explain Redwater or do you think it should be forgotten? Leave us a comment on our Facebook page @EntertainmentDailyFix and let us know what you think!