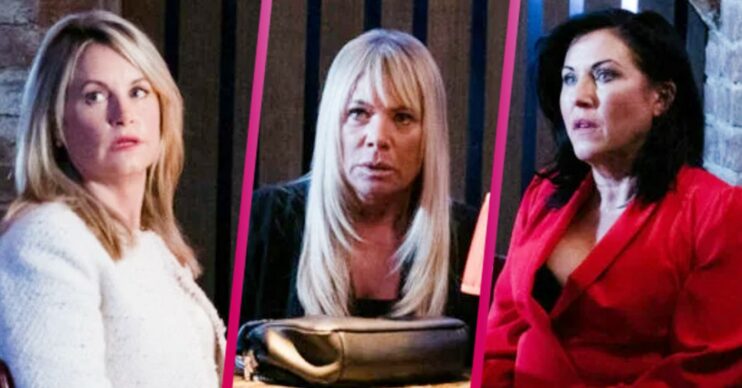 Who dies in EastEnders dramatic shooting?

Will Sam, Sharon or Kat survive the attack?

EastEnders is lining up a dramatic shooting plot next week, but who dies?

Sam Mitchell, Sharon Watts and Kat Slater are amongst those caught up in the Walford drama, but will they all make it out alive?

Gun drama at the opening of Peggy’s

As Sharon and Kat prepare to open Peggy’s next week, Sam is still trying to muscle in on the action.

Kat and Sharon set her up with a long list of chores to complete. But Sam manages it with ease and leaves Dotty in charge while she goes to glam up.

But Dotty is working for Shirley and she soon calls her to tell her the coast is clear, so Shirl arrives to trash the place.

Who dies in EastEnders shooting?

Sharon is working hard to get the club open.

She and Kat are bonding and it looks like everything is on track.

But when the men enter with the gun, Sharon panics and calls Sam for help.

A warning shot it fired, but will Sharon get hit when another shot is fired for real?

Kat reels from the warning shot, but listens to everything the men say.

Will she regret getting involved with Phil Mitchell?

Is their association about to cost her her life?

Sam tries to be the saviour when she stands up to the men.

She refuses to back down to their demands and defiantly tells them to pass a message on to Jonah, who they are assuming is behind this.

But when it becomes clear their threats are serious, Sam realises she has to give in.

She takes them to the safe, but things spiral out of control.

Someone is shot – but is it Sam?

Will she die only weeks after she’s returned?

Shirley is mid-argument with Kat and Sharon when the gunmen arrive.

She has trashed the club as revenge for all the times the Mitchells have hurt her family. She warns them she isn’t going to stop her vendetta.

When the attackers enter, Shirley darts into the office to take cover.

But it’s the safe the thugs want and panicking Shirley is hiding right by it.

When the gunshot rings out, is she the one who takes the bullet?

Or with her vendetta against the Mitchells does she know more about the gunmen than she’s letting on?

Dotty is working with Shirley, helping her destroy the Mitchells.

A hiding Shirley tries to get to Dotty when she realises the men are entering the office for the safe.

But will she put Dotty in danger in the process?

EastEnders is remaining tight-lipped over who survives the dramatic shooting.

Is this just a warning shot?

And who is really behind the attack?