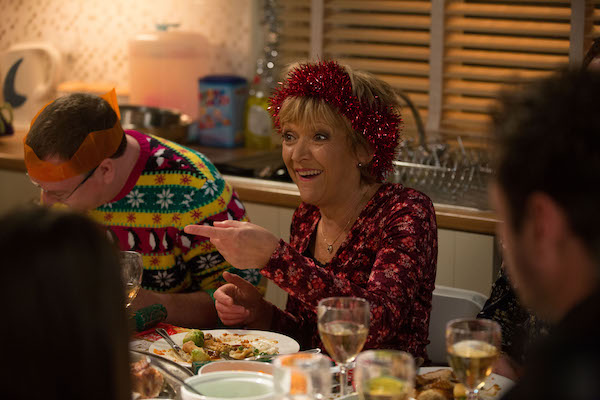 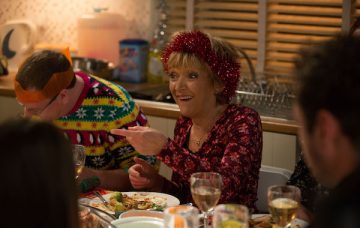 Easter is traditionally the time for a resurrection, with a three-day lapse for Jesus, but Alfie Moon managed to bring himself back to life in 30 minutes this Christmas.

Last night, he was assumed dead after being flung down the stairs in the Slater household after a stand-off with Kat and Hayley.

Hayley had pushed her baby daddy as he became aggressive with his missus after she discovered he was Cherry’s father.

He smacked his head on a piece of wood and was apparently toast.

Tonight, Kat and Hayley – with the help of Stacey, who was also at home and witnessed the shove – dragged Alfie’s body to the living room.

In states of shock, they struggled to decide what to do for the best.

She was shoved in the kitchen while the others tried to work out what they should tell the emergency services, before getting round to calling them eventually.

But Jean precipitated the process by calling herself.

When police arrived, the ladies explained what had happened… but when they went into the living room where Alfie had been left, they discovered him gone.

Hayley then realised Cherry had been snatched!

Alfie is alive – yay(ish) – but Easties appears to have ripped off a Corrie episode with Phelan and baby Zack (boo!).

Loads of viewers reckon that Jean has helped Alfie get away…

Plot twist Jean actually helped Alfie! Worked it all out halfway through, come one @bbceastenders make it better! ‍♂️ #EastEnders

I reckon Jean had something to do with Alfie’s escape with Cherry as she wasn’t in the room when the other 3 were discussing what they were gonna tell the police! #EastEnders

What do YOU think? Leave us a comment on our Facebook page @EntertainmentDailyFix and let us know!