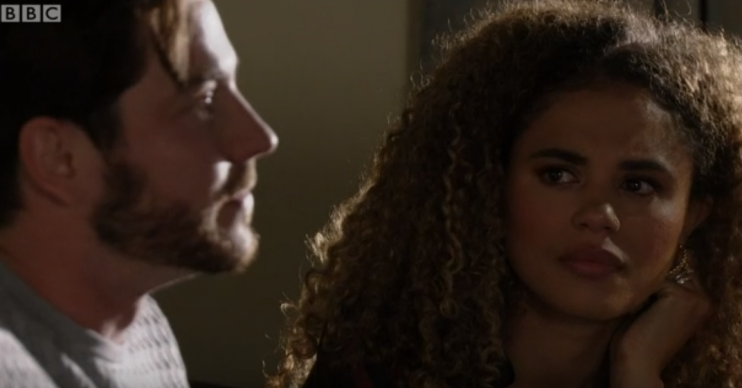 His tears were very convincing...

Viewers of EastEnders think Gray Atkins is lying about his past with his abusive father.

Earlier this year, viewers found out that Gray is abusive to his wife Chantelle and have seen him beat her on multiple occasions.

Despite Gray agreeing to do counselling after finding out they were expecting a third child, Chantelle discovered Gray had got into a fight in a club.

When Gray found out she lost the baby, he wanted to try for again but Chantelle stood up for herself, refusing to have another baby until he got his anger sorted out.

I think Gray is lying.

Recently Chantelle has been attending Gray’s therapy sessions with him and in last night’s episode (December 3, 2019), the solicitor opened up about his past after admitting he takes his anger out on his wife.

He revealed to his counsellor and Chantelle that his father was violent to him and told them the story of how his father broke one of his childhood toys in front of him.

He also told them how his father was abusive to his mother but he eventually left them when Gray was still quite young.

Gray opening up about his past had Chantelle in tears but viewers aren’t convinced he’s telling the truth.

There is something about Gray that I just don’t trust. I feel that all that discussion in his therapy session was a lie. But I could be wrong #EastEnders

Don't know why but I don't believe Gray's story about his father. #EastEnders

#EastEnders I bet Gray's still-happily-married parents rock up at the vow renewal. Bound to be something trite like that.

Do you reckon Gray’s stories about his dad are real? Or just something he’s concocted to maximise empathy? #EastEnders

I think Gray is lying #Eastenders

Gray and Chantelle's scenes were so brilliant tonight.

I can't tell if Gray is telling the truth or just manipulating Chantelle.

But I couldn't take my eyes of the screen#EastEnders

Is Gray being sincere and genuine? The most likely answer:#EastEnders pic.twitter.com/fRuq3HqKc4

Gray is just manipulating both of them. So easy to see through. #EastEnders

Do you think Gray was being honest about his past? Leave us a comment on our Facebook page @EntertainmentDailyFix and let us know what you think!