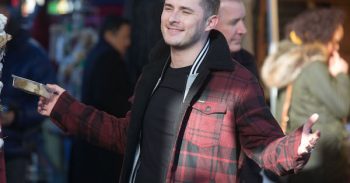 Last week in Tuesday’s episode (May 7) Ben was seen exchanging saucy text messages with a man.

He was receiving texts from a mystery fella called ‘Pecs Guy’ just hours after he had stolen several cars from Maximum Motors.

Viewers then saw Ben reply while having breakfast with his daughter.

He typed: “Problem at home I gotta sort out first.”

Ben also finished with an emoji – the aubergine emoji (which represents a penis, in case you didn’t know!).

While some were shocked by the X-rated pre-watershed messages, others were trying to figure out who could be ‘Pecs guy’.

Viewers on Twitter think that it could be new arrival Gray Atkins.

is gray gonna be the guy that ben is messaging?👀 #EastEnders

I think Ben's having an affair with Chantelle's boyfriend, Gray #eastenders

I’m confident it will be revealed that Gray and Ben are banging. Of course Gray is in the closet with wife and kids and this will lead to tons of story #EastEnders pic.twitter.com/9m2pr4E2tQ

Jessica Plummer, who plays Chantelle, has addressed the rumours.

Speaking to The Sun, Jessica said: “Oh my God that would be awesome.”

She then added: “Well I’m not sure about Chantelle, but like Jessica thinks that’s awesome, if the writers haven’t thought of that, they should maybe consider it.”

The actress, who shot to fame in the girl group Neon Jungle, has hinted there could be drama ahead.

Who do you think is Ben’s secret lover? Leave us a comment on our Facebook page @EntertainmentDailyFix and let us know what you think!