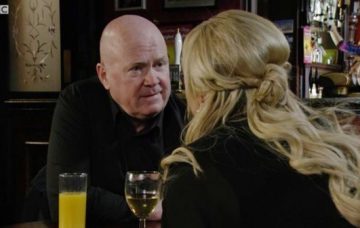 It was revealed Keanu was the father

In last night’s episode of EastEnders (July 29 2019) Sharon received the DNA results of her unborn baby.

The pre-natal DNA test excluded Sharon’s husband Phil from being the father meaning that her stepdaughter’s fiancé Keanu Taylor is the father. (Unless there’s a big secret NONE of us know about…)

However, despite Phil being excluded as the biological father, viewers still think he is the baby’s father.

I’m now confident the baby will be Phil’s and this will be revealed in a twist later down the line, I just don’t think the show would pass on the opportunity to have a Mitchell-Watts legacy child. #EastEnders

Nah, Phil has to be the dad, there'd be no point otherwise #EastEnders

Phil has to be the biological father of Sharon's baby, they 'revealed' the twist too quick #EastEnders

Although Bailey and Keegan didn’t see what the letter contained they decided to get back at the Mitchells for the amount of rubbish they produce.

This left viewers questioning why Sharon didn’t put the letter through a shredder.

Louise soon discovered she was pregnant, but also discovered her dad was paying Keanu to be with her.

Read More: EastEnders: 7 suspects who could be behind Phil Mitchell’s attack

Phil arranged for Keanu to go away to work at another garage so Louise didn’t have to see him, but after some encouragement from Sharon and Bex, Louise ran to tell Keanu that she was still pregnant.