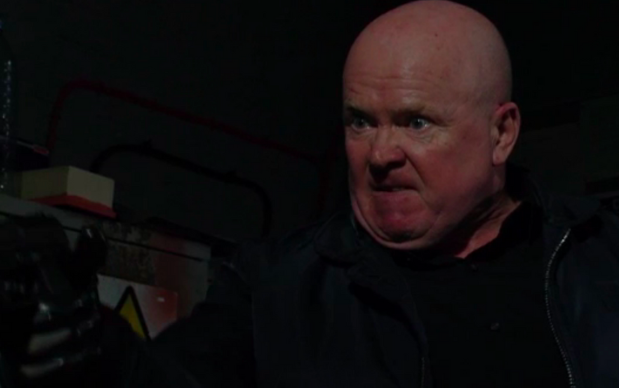 Was it too brutal for pre-watershed?

Phil Mitchell took his revenge on Jack Branning last night, tying him up and beating him to a pulp – and some EastEnders viewers found the scenes way too violent.

On Tuesday (December 17), a red-faced Phil abducted Jack in a bid to end his life…

Viewers know that Phil is under the false impression that Jack has been having an affair with Phil’s wife Sharon and is convinced Sharon’s baby is his.

In dramatic scenes some compared to a Quentin Tarantino film, Phil kidnapped Jack, beat him up and, after dousing him in petrol and taking out a loaded pistol, he was stopped from killing his enemy by son Ben and future son-in-law Keanu Taylor – who we know is the real baby daddy.

Phil fumed: “You’ve had kids with my sister, now my wife? Oh you really didn’t think I’d find out?

“Well everyone who betrays me gets what they deserve. Everyone.”

But many fans were horrified by the scenes, with some believing they were too violent for the pre-watershed slot.

One tweeted: “EastEnders was far too violent pre-watershed. I am not a prude, but the watershed needs re-establishing.”

Another said: “Please stop showing violent scenes at 7.30pm. What do you expect people to think? Tonight’s violence was totally unacceptable.”

A third added: “That was far too graphic, no need at all. Should have been a warning so people can make a choice not to watch.”

That was far too graphic, no need at all.

“Never watching EastEnders ever again,” fumed one more. “Brought on my PTSD – the writers don’t even think of the damage they do after seeing something so horrible. This is wrong. There should be a warning that the episode will contain brutal violence.”

One more said the scenes were “upsettingly violent for before 8pm”, and another added: “No wonder there is so much violence on the streets when programmes such as EastEnders are allowed to broadcast it everyday.”

Yeh that was far to graphic, no need at all. Should have been a warning so people can make the choice not to watch.

No wonder there is so much violence on the streets when programmes such as eastenders are allowed to broadcast it everday on our national fee paid for television. It's high time we hired talented writer's ablè to create interesting non violent story lines. https://t.co/Z669o0SWqu

#EastEnders absolutely far to violent pre the watershed. I am not a prude but the watershed needs reestablishing!

Please stop showing violent scenes at 7.30… what do you expect you people to think. Tonight’s violence is totally unacceptable

No but some are….and young impressionable teens. It just doesn’t need to be so visibly violent

Too violent at this time of night

#EastEnders seems rather upsettingly violent for a show on before 8pm

Viewers will have to wait until Thursday (December 19) to discover Jack’s fate… and whether Keanu will confess his guilt.

Spoilers tell us the REAL truth will be dropped like an atomic truth bomb over Christmas.

Do you think the episode was too violent? Leave us a comment on our Facebook page @EntertainmentDailyFix and let us know what you think!