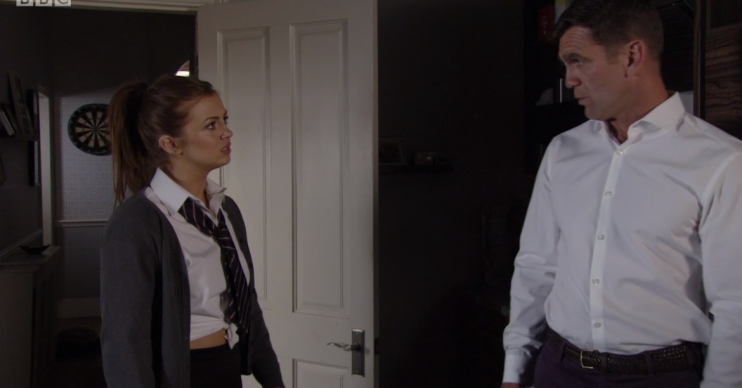 She's in year 11 at Walford High

EastEnders viewers have slammed Tiffany’s school uniform claiming no school would allow her to wear her uniform how she wears it.

The 16-year-old can often be seen walking through Albert Square in her uniform.

Her school uniform consists of a short black skirt, white shirt, grey cardigan and tie, however Tiffany changes up how she wears it and ties a knot at the bottom of the shirt.

Viewers have pointed out that no school would allow a uniform like that.

What school allows girls to wear uniform like Tiffany? #EastEnders

Tiffany’s skirt needs to be brought DOWN #EastEnders

#EastEnders Walford High is a very liberal school to let Tiffany get away with wearing a uniform like that. Lasses at my old school wore more than that even on leavers day when teachers could do naff all about it.

How is Tiffany going to school dressed like that rah #eastenders

Tiffany on her way to film a Brittany Spears tribute video. #EastEnders

Earlier this year, Tiff was groomed by a gang and ended up getting involved in drug delivery.

Soon things turned sour when she and gang member Evie ended up owing some dangerous people a lot of money.

Once ex police officer Jack got involved he managed to help his great-niece and Evie was sent somewhere safe.

Afterwards Tiffany revealed to Jack that she had been raped by one of the gang members but she refused to go to the police about it.

As time went by, Tiffany began moving on and romance started to blossom with her and Keegan Baker, but she was thrown when Fraser appeared in Walford.

She told Jack she had seen him and confronted the gang member telling him to leave Walford.

However, he didn’t listen and when Jack saw him on Albert Square he soon saw red.

Jack confronted the rapist in an alleyway, unaware that Fraser had a knife on him.

Despite several warnings to “go home”, Jack held his ground and told the young hoodlum to leave the Square and never return…

When Jack cornered the drug dealer in an alleyway and revealed he knew his identity, he shoved Fraser up against the wall.

Fraser seemed genuinely scared, as Jack yelled: “She was a kid and you took that away from her. You come back here I’ll kill you. Do you hear me?”

In a bid to escape, Fraser knifed Jack in the shoulder saying: “I told you this wasn’t going to go how you wanted it to.”

He then crossed a line when he goaded Jack by claiming his niece was “nothing special” and that he would come back for his daughter Amy when she “grows up”.

Letting his anger get the better of him, Jack lost control and repeatedly punched his nemesis in the face.

During the special 9pm post-watershed episode, Jack shouted: “How brave are you now, hey? How does it feel?

“Do you know how many blokes I know who would take you apart for fun? Just one call. But why give someone else the pleasure.”

He also threatened to cut off Fraser’s private parts if he ever returns to Walford.

Recently one of Jack’s old police friends came to warn him he was being looked into for Fraser’s assault.

Jack asked girlfriend Denise for an alibi that day but when he refused to tell her why, in order to protect Tiffany, she ended things with him, leaving Tiffany feeling guilty.