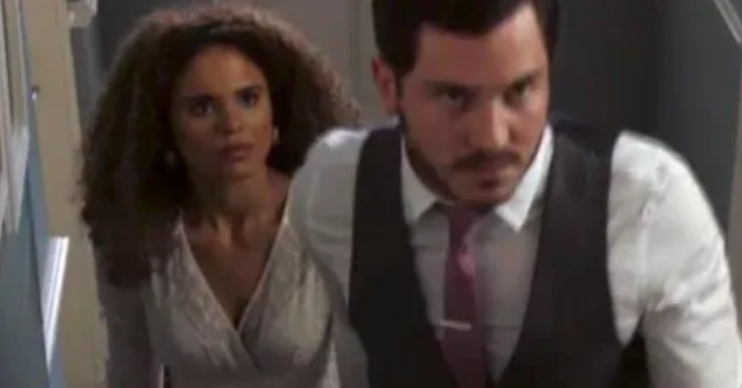 He is desperate to get her pregnant again

Viewers of EastEnders feared Gray Atkins has raped his wife Chantelle, after he led her upstairs in last night’s (Friday, December 27) episode.

Over the last few months, viewers have seen Gray’s abuse towards his wife intensify.

A couple of months ago Chantelle discovered she was pregnant and Gray agreed to go to counselling for his anger.

Sadly Chantelle lost the baby and when Gray found out he was heartbroken, but also upset his wife had kept the miscarriage from him for a couple of weeks.

Recently the pair decided to renew their vows, but earlier this week their plans went west when their venue cancelled.

After Gray accused Chantelle of not trying hard enough to find a new venue, she was hurt and in last night’s episode, when she suggested waiting till next year, he secretly planned the vow renewal to be at their home.

Although Mitch could see that something wasn’t right with Chantelle, she told her dad she was just worried about her brother Keanu, who hadn’t been seen in days.

After the renewal, Gray told Chantelle they were going on a honeymoon to the Canary Islands and he suggested they tried again for a baby.

However after their family left, the hairdresser tried her best to avoid Gray.

He soon lost his temper and told her they agreed to try for another baby, before leading her up the stairs.

As they went up the stairs, the duff duff started.

Although viewers didn’t see what happened, they fear Gray has raped Chantelle.

Scream Chantelle. SCREAM. This shit is breaking my heart. #Eastenders

It's so difficult to watch this gray and Chantelle storyline, I could tell when he went to them meetings he won't change, once that mentality is there it won't go away… He's a coward and weak supposed man… Vile creature #EastEnders

Ok, well after tonight's Ep I don't have my usual excited babble about it, although it was brilliant. Instead i just feel a physical sickness at Chantelle about to be raped. It shows how well written and acted #Eastenders is, but I am left feeling deeply sick, shaken and so sad.

Every Gray/Chantelle scene fills me with anxiety. #EastEnders

So Gray is now a rapist? He’ll never change. Chantelle needs to get the hell out. #eastenders

Tonight scenes between Chantelle and Grey were as sickening as they should be for that vile situation. Grey raping Chantelle of course was horrendous but his behaviour has already way crossed the line many times over before. He needs to be destroyed #Eastenders