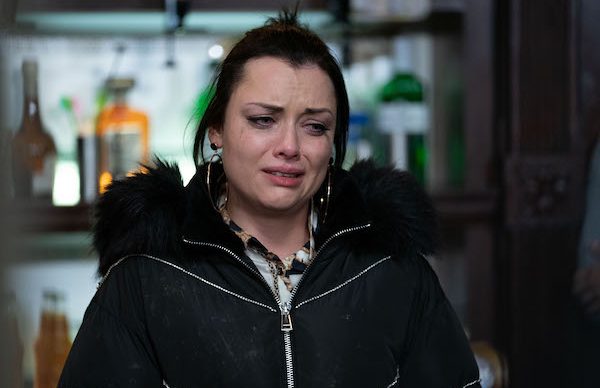 For weeks psycho Leo has been stalking Whitney, convinced she’s lying about his dad Tony grooming her when she was a child.

Whitney realised her final letter from Tony had been taken and phoned the police to give them the update on what she’d discovered.

She then planned to go to the pub with Kush and Kat, but when she was in the bathroom, Leo used Whitney’s phone to say she would be late.

He then confronted Whitney with the letter and a knife as she was getting ready in her bedroom.

Leo was furious to see Tony told Whitney that he loved her, thinking it meant Tony had forgiven her for ‘lying’.

Knowing he could kill her, Whitney threw her box at her crazy ex’s head and made a run for the front door.

By the time she realised both doors were locked, Leo had followed her downstairs.

He tried to attack her again but she pushed him and he ended up hitting his head against the kitchen table.

As Whitney tried to call for help, Leo got back up tackled Whitney down to the ground.

She managed to get hold of a knife but, as Leo got on top of her and slipped, he fell on it.

Whitney whimpered Leo, in disbelief at what had just happened, as Leo’s body lay lifeless.

Everyone at home when Leo fell on the knife after trying to stab Whitney:#eastenders pic.twitter.com/4MgpnVxTnt

Well done #Whitney #EastEnders He wasn't gonna stop there. Hope #Leo stays down. He was a piece of shit.

Whitney, don't you worry girl. I'll say I did it. I'd go to jail for you #EastEnders

If they don't give Whitney a self defence charge istg #Eastenders

Will the police accept it was self-defence? And will she finally be free of the ghost of her abuser Tony?