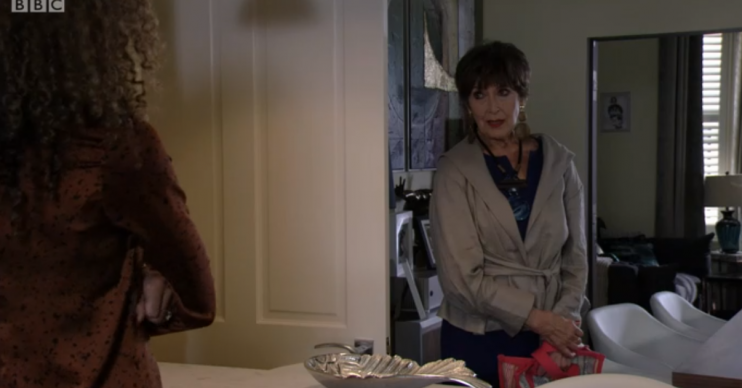 Gray is abusive to wife Chantelle!

EastEnders viewers were shocked when medium Shyanna picked up on Gray’s secret abuse in the Atkins’ house.

In last night’s episode of EastEnders (August 26 2019), Bailey had hired medium Shyanna to come over so she could communicate with her late mother Dinah, who took her own life earlier this year.

Despite her half-siblings Keegan and Chantelle warning Bailey not to do it as it was a scam, the young girl decided to go through with it anyway.

Although Shyanna picked up on things such as Keegan being Bailey’s paternal half-brother, Bailey not living at the Atkins house, Dinah being ill and her only recently finding her new family, Bailey soon threw her a question which proved she wasn’t actually talking to Dinah.

Bailey asked Shyanna what her mum’s favourite colour was and the medium said it was blue as it was a very special colour to her.

But Bailey told her she hated the colour blue and only had a blue hoodie as it was soft.

Bailey quickly realised Shyanna figured out Bailey didn’t live there due to pictures, and her guessing the rest.

The young girl stormed off upset and Chantelle was left furious with Shyanna for conning her sister.

As Chantelle handed over the cash, Shyanna had some shocking words for the hairdresser.

She said: “You’re all the same, aren’t you, you people. With your perfect house and perfect lives. But scratch beneath the surface and it isn’t, is it? – Perfect?

“There’s a vibe in this house. You can’t fight it alone.”

When Chantelle asked “Fight what?” Shyanna made a shocking remark.

She said “Things are going to get very dark for you if you don’t” before leaving the Atkins house.

Viewers were shocked to see the medium had picked up Gray’s abuse, despite him not being there.

The way that "psychic" came for Chantelle about Gray OMFG! #EastEnders

That medium is right about Chantelle #EastEnders

After the Walford 10k, Mitch admitted he won the race by cheating and residents laughed, leaving Gray embarrassed.

In another dark scene, Gray locked his wife in their house before attacking her.

Viewers have grown worried for Chantelle after she disobeyed Gray and spent more money than she should’ve helping sister Bailey.