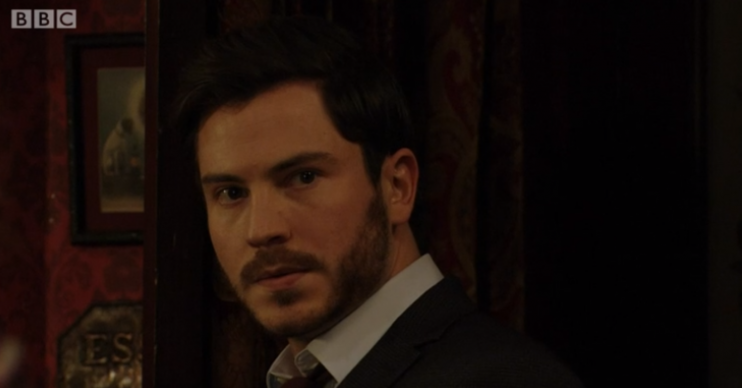 EastEnders viewers have predicted an explosive affair for Gray Atkins and Whitney Dean.

Over the last few weeks, Gray has been representing Whitney, who is due to go to court for the murder of Leo King, and it’s been obvious there’s an admiration between the pair.

In this week’s EastEnders, Whitney was confronted by Leo’s mother Michaela, who wanted to know exactly how her son died.

Feeling guilty, Whitney told Michaela the truth. But she quickly turned on Whitney, branding her a “murderer.”

Fortunately for Whitney, Gray and Ruby stepped in and gave Michaela some home truths about her stalker son.

In last night’s episode (Tuesday, April 14) Gray told Whitney that Michaela knows how Leo died as she’s been helping the police and the prosecution.

And Michaela soon came back for round two. As she walked into the pub yelling at Whitney, Gray grabbed Michaela and gave her a stern warning.

He told her to keep away from Whitney, and then said that Michaela’s the only person mourning Leo’s death.

As Gray sprang into protective mode, Gray’s wife Chantelle seemed on edge by her husband’s temper.

Read More: Are Emmerdale and Coronation Street on tonight? You daily soap listings including EastEnders

Viewers know Chantelle is more than aware of Gray’s awful temper as he beats her when he’s angry, but was there something more to Chantelle’s concern?

When Whitney and Gray exchanged a glance, it left fans convinced the two are going to have an an affair.

I see a Whitney & Gray affair coming up! #EastEnders

Whitney is falling for Gray #EastEnders

So Whitney and Grey are going to start an affair ? #Eastenders

I can see a Gray and Whitney affair coming on … #EastEnders

They better not go there with gray and Whitney #EastEnders pic.twitter.com/phmziwirka

Whitney and Grey affair. She’s vulnerable, seeking support and affirmation. He’s dark and violent with a
charismatic veneer . He can spot a vulnerable woman #eastenders

RIGHT anyone else feeling a Whitney/Gray storyline coming on? #EastEnders

There isn't gonna be a happy ending with Gray either Whitney so please don't betray your friend just because of Gray.😕 #EastEnders

Will Gray and Whitney have an affair?

The soap has not confirmed whether Gray and Whitney will have an affair.

Whitney is falling for Gray.

Although viewers think the two could get together, Gray is married to Chantelle, who happens to be Whitney’s friend.

However Gray isn’t the perfect husband he makes out to be. The solicitor is abusive towards Chantelle and has physically hurt her on more than one occasion.

But will he eventually add cheating on his wife to his list of evil acts?

Watch on Mondays at 8pm and Tuesdays at 7.30pm on BBC One.

Do you think Gray will cheat on Chantelle? Leave us a comment on our Facebook page @EntertainmentDailyFix and let us know what you think!