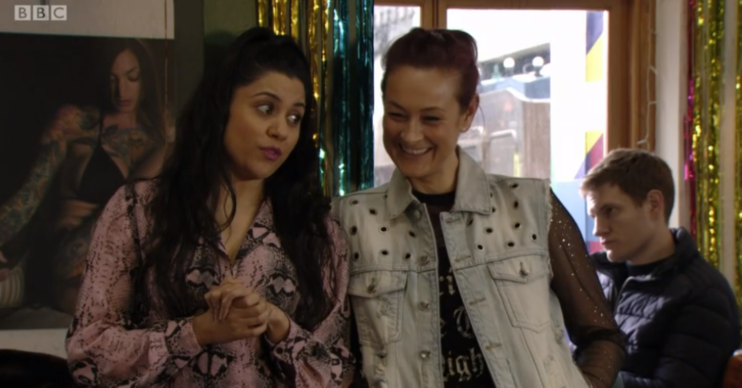 EastEnders viewers have predicted a steamy affair ahead for Tina Carter and Iqra Ahmed after spotting a hint in last night’s episode (Tuesday, June 16).

As fans of the show know, Iqra is already in a relationship with Ash Panesar. However viewers believe that she will end up cheating on her girlfriend with Tina.

In the episode, which was last one before the show temporarily goes off air, Iqra went into the Prince Albert club, which Tina manages.

As Tina told Billy they were out of snacks, Iqra offered her and Keegan’s services to supply the bar.

Later, the pair took joy in teasing Billy Mitchell. After Tina revealed her and Billy once spent the night together, Billy explained his issues with Mitch and Karen

The two women helped him by giving some advice. And as Billy and Mitch went head to head on the ice hockey table, Iqra and Tina seemed to be laughing and having a good time together.

Viewers picked up on the chemistry between the pair and think they could be heading for an affair.

I feel like Tina and Iqra will hook up #Eastenders

anyone else want iqra & tina? 💗 #eastenders

I genuinely think Tina and Iqra are gonna get together, and I’m here for it #EastEnders

This isn’t the first time viewers have predicted a romance for Iqra and Tina.

Last year as the two women prepared for the Walford 10K, they appeared to flirt with each other.

However not long later, viewers were introduced to Iqra’s girlfriend Ash. It was also revealed they had been together for a year.

But will Iqra and Tina be the ones to end up together?

When will EastEnders resume?

No specific date has been given for EastEnders to return and filming is yet to resume.

Although the show is off air, EastEnders fans can still get their fix with Secrets From The Square which will air every Monday for the next five weeks.

Read More: EastEnders fans in tears as soap goes off air for first time in 35 years

Iconic episodes, including Den and Angie’s two-hander, Sharongate, and Max and Stacey’s affair reveal, will be re-aired on Tuesday nights.