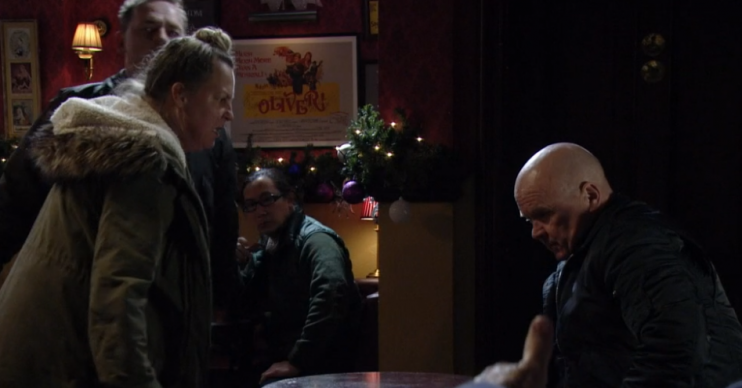 Lorraine joined the soap in 2017 as Karen

Viewers of EastEnders have praised Lorraine Stanley’s acting after Karen Taylor’s outburst in The Vic.

Over the last few days Karen, played by Lorraine, has been worried about her son Keanu, who hasn’t been seen since Christmas Day.

She fears Keanu was killed by Phil Mitchell, as he discovered Keanu is the father of his wife Sharon’s baby.

In last night’s episode (January 2 2020) Karen told new boyfriend Billy that she was going to take Jack’s advice and report Keanu as missing to the police.

However, Billy tried to stop Karen, telling her Phil wouldn’t hurt him, but she just accused him of trying to protect his cousin.

Karen then stormed over to The Vic where Phil was having a non-alcoholic drink.

She went up to the dodgy businessman and said: “Oi Mitchell! Where’s my boy?”

As he didn’t answer, she hit his drink off the table and yelled: “Don’t you ignore me?”

Phil told Billy to reign Karen in before she did something she regretted, but Karen wasn’t having it and screamed: “You know what’s happened to him. You tell me, you tell me what you’ve done to my boy!”

Phil continued to deny doing anything to Keanu but Karen came right out and said to Phil she thinks he’s killed Keanu.

But when he ignored her once again, she attacked him and tried to grab at him.

Despite Billy’s attempts to pull her away, it didn’t work and Martin Fowler was forced to step in and pull her off.

Viewers loved Karen’s outburst and have praised Lorraine for her acting.

Karen Taylor is an iconic character in the making. Lorraine Stanley is so good at comedy and these darker stories give her chance to show what she can do. Adore her. #EastEnders

Lorraine Stanley is one of the best actors on #EastEnders

Flipping heck Karen in a rage is terrifying. Certainly not afraid of Phil that's for sure. Lorraine Stanley who plays her is excellent #EastEnders

Martin took Karen back to Dot’s house to calm her down and Martin learnt that Karen knew about Sharon and Keanu for a long time and said nothing.

Lorraine Stanley is one of the best actors on #EastEnders.

Karen opened up about how not knowing where Keanu is or if he’s alive was tearing her to pieces.

Later, he went to see Karen and told her Keanu is alive but she couldn’t tell anyone.

Karen broke down in tears of joy knowing her son hadn’t been killed.

But a new picture released by the soap from tonight’s episode, shows Martin looming over a worried looking Karen.

After hearing what he had to say, Karen is desperate to know if he’s telling the truth.

As she starts questioning everyone about what they know, Martin is forced to step in.

Will Karen keep her mouth shut? Or is Martin in BIG trouble with the Mitchells?