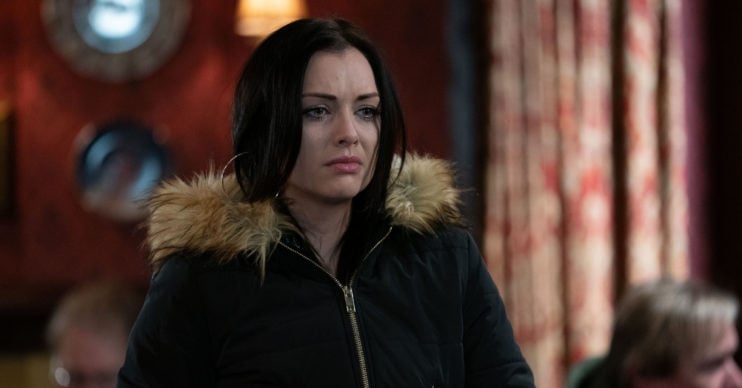 Whitney had a hidden phone but didn't appear to use it

EastEnders fans have been left confused after it was revealed Whitney had a hidden phone while being held hostage by Michaela.

After killing her stalker Leo King in self defence, Whitney has been harassed by Leo’s mum Michaela, who blames her for her son’s death.

In last week’s episodes Whitney planned to flee Walford, fearing she would go to prison. She even obtained cash and a burner phone from her uncle, Max.

However, she decided to stay around after hearing Michaela was arrested.

But Michaela was then let go by police, showed up in Albert Square and kidnapped Whitney. This week, Jean and Sonia found Whitney’s goodbye letters in the bin and assumed she had fled.

Little do they know Michaela is holding Whitney hostage in her flat.

In last night’s episode of EastEnders (Tuesday, April 28) Michaela went into Whitney’s room and played her a voicemail Leo had left, claiming Whitney was going to kill him.

Meanwhile, back in Walford, Max learned of Whitney’s disappearance and decided to call the burner phone he gave to her.

As Michaela and Whitney were in the same room, the phone went off. Michaela turned to Whitney and said: “Secret phone?” before taking it out of her bag.

Whitney quickly grabbed the phone and answered yelling: “Max! Michaela’s got me! Help me! No!”

If Whitney has a secret phone, why not use it to call the police?

Michaela then broke the phone making it unusable. But viewers were left wondering why Whitney didn’t use the phone if she had it with her this whole time.

If Whitney had the burner phone the whole time why the hell didn't she call someone for help the second Michaela left her alone? Why wait for Max to call her instead? #Eastenders 🤔

#EastEnders if Whitney had a phone which Max called her on, why didn't she use the same phone to call him (or somebody else) to call for help?

What is a "burner" phone anyway?

Is that the answer to the first question (i.e. you can only phone one way)?

#Eastenders if Whitney has a second phone why not use it to call police ?

If Whitney had a “secret phone” why the hell did she not use it? #eastenders 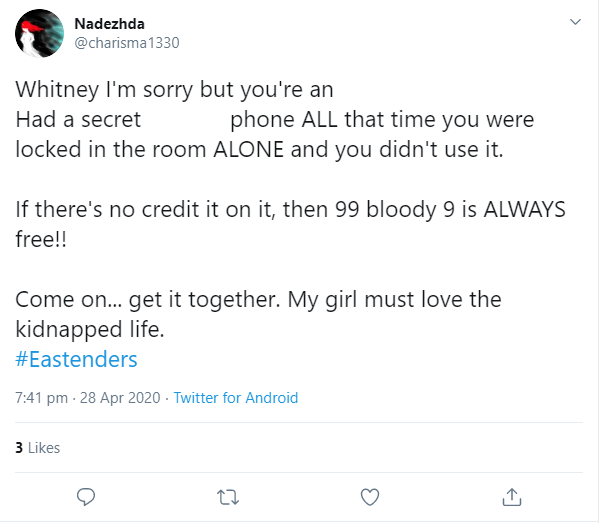 #eastenders Wait a min. Was that phone in her bag all the time?

#eastenders As someone has already pointed out, assuming Whitney knew the phone was in her bag, and even if it had no credit, EVERYONE knows you can still dial 999. Or am I missing something?

If Whitney's had that phone all of the time.. why didn't she use it? #eastenders

Max later went to talk to Jean, Kush and Gray, revealing he knew about Whitney’s plan to leave but thought she’d change her mind.

He also revealed he spoke to her on the phone and Michaela had taken her. But will they be able to find her?