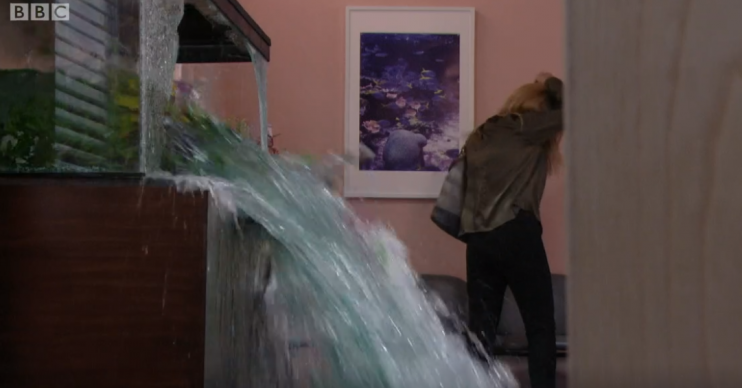 Soap viewers were left laughing at the “fantastic” fish tank stunt in the BBC soap.

Hunter has recently escaped from prison and is hiding in an empty flat.

When Sharon Mitchell revealed she needed to go to the hospital for her amnio and her husband Phil couldn’t come with her, Mel saw a golden opportunity and offered to go with her.

Once they were at the hospital, as Sharon went into her appointment, Mel said she needed to go to the toilet.

Spotting a trolley with antibiotics in and then a nearby fish tank with a crack in it, she elbowed the fish tank in order to cause a distraction.

As she elbowed the tank and quickly moved away, water began to spurt out. Eventually the pressure caused the tank to smash and flood the waiting room.

On a Digital Spy forum called ‘EastEnders: The Fishtank’ one viewer wrote: “Okay I don’t know why but I found that scene so funny. For a start, that tank didn’t look big enough to hold that much water when it crashed.

“When Mel leaves this is a scene that should be included in her best bits. Fish tank disaster as spectacular scene 2019!”

Another viewer commented: “It was fantastic. The stunt department really surpassed itself. Were any of the fish harmed, does anyone know?”

A third said: “It was absolutely awesome, I laughed out loud. But the best bit of all was Mel turning up in the consultation room and saying, ‘It’s like Titanic out there.'”

EastEnders did a behind the scenes video on the stunt which showed how the stunt was filmed. It also showed Mel actress, Tamzin Outhwaite, had a stunt double.

We don’t like to fish for compliments, but that tank explosion went very well! Don’t you think?
Take a look at this video to find out how we did it… #EastEnders pic.twitter.com/Mem90Bu7IQ

It was also confirmed than no fish were harmed in the making of the stunt!