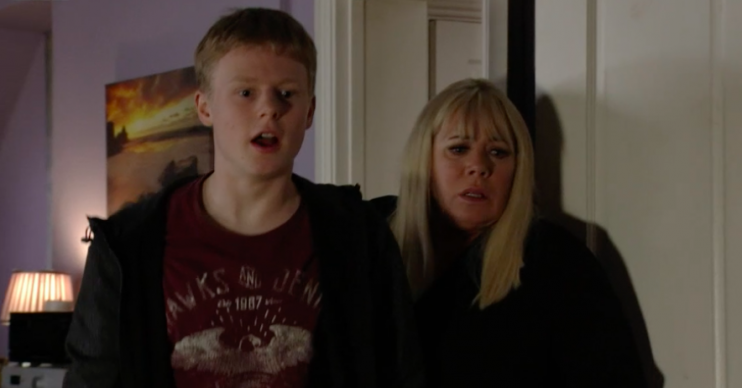 EastEnders viewers’ horror as they fear Bobby has killed Denny

Viewers reckon Bobby Beale may have struck again in EastEnders.

Killer Bobby pushed Denny Watts back during a row, causing the thuggish teen to hit his head and be knocked unconscious in last night’s episode.

He had had good intentions by trying to help Sharon heal her relationship with her wayward son Denny.

Bobby convinced Kathy to help by getting Shirley to bring Denny over to talk things through with his mum after weeks of a fractured relationship.

But when Denny started to shout abuse at everyone in the house, still enraged by his mum having Keanu Taylor’s baby and not Phil’s – it all went wrong.

He shouted: “You’ve wrecked this family, you’re the reason why everyone’s gone away. I was excited for this baby to come but now I don’t care if it lives or dies.”

As Sharon reeled from the awful words, Bobby told Denny that he didn’t mean it and he was just angry over what had happened but Denny hit back.

He raged: “I don’t need lecturing by Ian Beale’s slapper of a mother. This family’s pathetic, you know Phil used to shove Ian’s head down the bog for fun?”

As Sharon stepped in to control Denny he lashed out and punched the wall near her, leading to Bobby pushing him away hard.

But as he fell backwards he hit his head on the coffee table in the living room.

Bobby looked sickened by what he’d done as Denny hit his head and collapsed on the floor in the same spot Lucy had died and he suffered a flashback from that night.

Viewers were left horrified with one saying: “Omg I hate EastEnders don’t make bobby kill someone else.”

A third said: “Bobby out here killing people again #EastEnders,” while another wrote: “Are you telling me Bobby Beale has just killed Dennis the same way he killed his sister?!”

What did you think of the dramatic scenes? Leave us a comment on our Facebook page @EntertainmentDailyFix and let us know what you think!