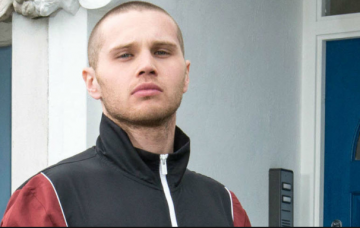 The engineer returned last night having spent the last few weeks in Spain doing business for Phil Mitchell. However, it wasn’t all sunshine as he ended up taking a beating from six men.

He returned to Albert Square in last night’s episode but it was very clear he wasn’t happy.

He went to see Phil telling him he just wants to “get on” with his life.

The teenager went to The Arches and they were visited by Phil’s associate Danny and revealed Keanu fought off six Spanish men and branded him a “legend”.

As Sharon arrived and the pair were left alone, he shut down his ex-lover.

Read More: EastEnders viewers CONVINCED Lucy Beale isn’t dead and will be back next month!

He revealed as he thought he was going to die in Spain, she was the last person he thought of.

He then told Phil’s wife that he “hated her” for sending him to Spain and that she was dead to him.

Sharon face when keanu got rid of her 😂😂 #EastEnders

Thank god Keanu kicked Sharon to the curb. Not a Sheanu fan and I would see rather see Keanu get away from that mess #EastEnders

Fans know that Keanu and Sharon began having an affair last year, however she called it off leaving the mechanic heartbroken.

As Sharon went away, he began seeing Phil’s daughter Louise, however when Sharon returned from her getaway, it was obvious Keanu wasn’t over her.

Are you glad Keanu is back? Leave us a comment on our Facebook page @EntertainmentDailyFix and let us know what you think