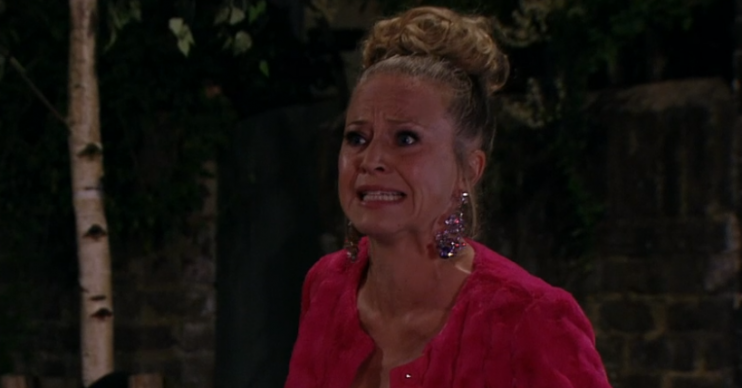 Linda was arrested for drink driving

Fans of EastEnders are fed up of “selfish” Linda Carter after she was arrested for driving under the influence of alcohol.

Viewers know Linda has been struggling to accept that her son Ollie has autism.

The little boy was recently diagnosed with Autism Spectrum Disorder and Mick and Linda were told he was at the milder end.

However, Linda hasn’t taken the news well and has hit the bottle.

In last night’s episode of the BBC soap (November 25 2019), Linda had to take Ollie to school after she’d been drinking the night before.

On the school run she ended up hitting the car of her ex-friend Shelley leaving some serious damage to the vehicle.

Although she drove off, Shelley’s friend saw the incident and it was reported to the police.

When Shelley made a comment about Linda being drunk, the police asked Linda to take a breathalyser test, which revealed she was still over the limit.

When you come to think of it, Linda is such a selfish mum.

Chantelle Atkins witnessed this and Linda was arrested for driving under the influence.

She was quickly released and Chantelle came to pick her up.

Linda revealed to her friend that she was being charged with drink driving and she will be appearing in front of the magistrates in a few days and could face a driving ban.

When she returned home, she didn’t tell her husband Mick about what had happened.

Mick soon confronted Linda about how she was acting oddly, but she still kept quiet about what she’d done.

Viewers are fed up with Linda and her “selfish” behaviour.

If Linda doesn't sort herself out after this arrest I don't know what will… She's getting on my nerves her son has autism many people love full lives with that not like he's seriously ill.. #EastEnders

Linda the hypocrite. She can keep secrets, but no one else can from her 🙄 #Eastenders