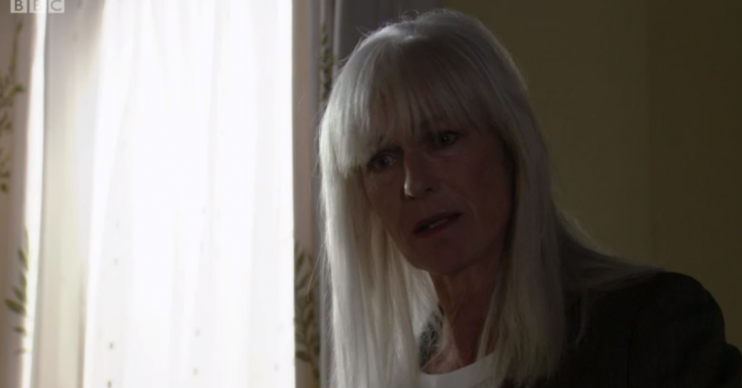 Ritchie was first introduced in 2005

Richie, who is played by Sian Webber, has made numerous appearances in EastEnders and popped up in many interview rooms in the show since her first appearance in 2005.

These include when Sonia Fowler was accused of murdering her mother-in-law Pauline in 2007, Dot Branning for her part in Nick Cotton’s death in 2015 and in 2016 when Bobby Beale confessed to killing his sister Lucy.

Although she has helped many Albert Square residents, she’s mainly around to help the Mitchell’s including when Sam Mitchell murdered Dirty Den and Ben murdered Heather Trott.

But last night she returned to help long-time friend and client Phil.

He dropped some cash in the street and when Shirley pointed it out, Ben wasn’t bothered saying there was “plenty more where that came from”.

Shirley told Phil she had seen Ben rolling out of a cab and he had been to a casino all night and said he should keep an eye on him.

Phil decided to talk to Lola, the mother of Ben’s daughter, who revealed he was always out clubbing and when he was home, he was never alone.

The Walford businessman then tried to get information out of Keanu, who works in the Arches, but he said Ben was’t around much and he just keeps his head down.

Phil then made a big decision and decided to have Ben cut from his will and gave what was Ben’s share to Keanu, his daughter’s fiancé and he called in Ritchie to do it.

Ritchie voiced her concerns about giving Ben’s shares to an outsider but Phil was adamant he was making the right choice.

Viewers were ecstatic to see Ritchie return to Albert Square.

RITCHIE. i stan that woman. #eastenders

it's about time Ritchie and her lesbian life partner moved into Albert Square permanently. #EastEnders

Were you happy to see Ritchie back on screen? Leave us a comment on our Facebook page @EntertainmentDailyFix and let us know what you think!