EastEnders viewers divided as Max and Stacey get close again

Max and Stacey have a lot of history!

Viewers of EastEnders have been left divided as Max Branning and Stacey Fowler appear to be getting close again.

Max and Stacey have been on and off for years. First starting their affair in 2006 when Stacey was in a relationship with Max’s son Bradley and Max was married to Tanya.

In a behind-the-scenes video of Stacey and Bradley’s wedding, Lauren accidentally recorded the pair kissing and was shocked when she watched over the footage.

On Christmas, the DVD was played in front of the Brannings and Slaters, exposing the affair.

The pair went on to have another affair in 2017 when Stacey cheated on her current husband, Martin Fowler.

In last night’s episode (July 23 2019) Stacey had to stop Max from attacking Ian, Rainie and Kathy.

Max’s granddaughter, baby Abi, is currently staying at Kathy and Ian Beale’s with her great-aunt Rainie, who is her legal guardian.

Angry after Rainie ran off with Abi, Max has been trying to see his grandchild but has been stopped by Kathy, who is Abi’s paternal great-grandmother, due to him being intoxicated.

Stacey took Max home and discovered he was self-harming again.

Stacey awkwardly looked around and meanwhile outside, Martin stared angrily at Max’s house.

The idea of Max and Stacey has left viewers divided.

Some think it’s boring and don’t want the pair to have another affair. 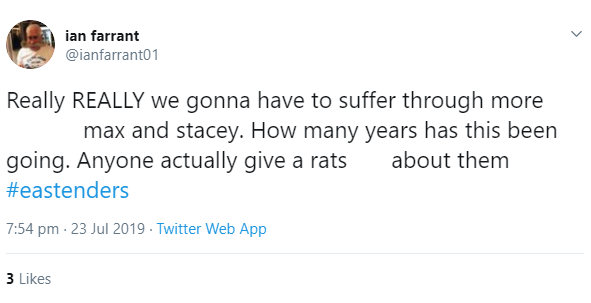 If Stacey has yet another affair with Max again: #Eastenders pic.twitter.com/1Z4oR73q5d

Others think Stacey and Max are meant to be.

Max and Stacey are getting close again and I’m here for it. Those two are meant to be! #Eastenders @bbceastenders

Dont hate me but ive always wanted Stacey and Max to end up together #EastEnders pic.twitter.com/4q1stVkFQ3

I root for Max and Stacey every time they’re on my screen, meant to be together #EastEnders

That said, I'm happy we're getting more Stacey/Max scenes. Jake Wood and Lacey Turner have some of the best chemistry in soap. #EastEnders

But for real i dont know why they won't just put Stacey and Max together clearly they'll always have this connection just #EastEnders pic.twitter.com/BevwAIM1hN

I just love Max and Stacey scenes. Lacey and Jake's chemistry always draws me in. #EastEnders

What do you think of Stacey and Max? Leave us a comment on our Facebook page @EntertainmentDailyFix and let us know what you think!