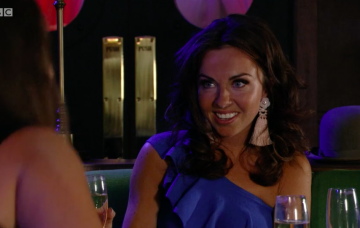 Ruby Allen will be at the centre of a consent storyline

The businesswoman made a shock comeback to Walford 12 years after last leaving.

Viewers watched as she reunited with her former best friend Stacey Fowler for a night out, but it didn’t all go to plan.

As Stacey briefly left their table in E20, Ruby began chatting with the handsome man she had been exchanging flirty looks with all night.

And in the brief time it took Stacey to tell her husband Martin to solve the riddle of the missing stuffed toy himself, Ruby had bagged them an invite to a party in Shoreditch.

Unfortunately Stacey had to point out that she couldn’t go, so instead Ruby left with the two men and left Stacey with the bill.

Fans were convinced this was the beginning of the rape storyline and were left disturbed by it.

One viewer said: “#EastEnders I think this is the start of Ruby’s rape storyline now that she’s left E20 with those guys.”

A second wrote: “Ruby is walking right into a trap #EastEnders”

A third added: “OMG, Ruby what are you doing!”

However, this isn’t actually the man who will assault Ruby.

Instead Ruby will return again with the consent storyline not beginning for several weeks yet.

Actress Louisa Lytton recently opened up about how she hopes the storyline will spark conversation about consent.

“Obviously, this is one person’s story so we are not trying to say, ‘This is what rape is’,” she recently said to BBC Radio 1Xtra.

“But it’s important to work with organisations like Rape Crisis and they’ve been brilliant.

“I think it is going to split the audience about views on consent and what happens to her, which will be a good thing.”

What do you think of the storyline? Leave us a comment on our Facebook page @EntertainmentDailyFix and let us know what you think.