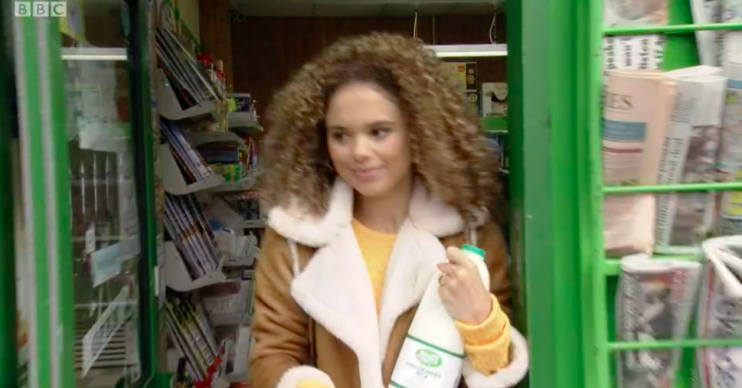 Viewers of EastEnders were distracted in last night’s episode as Chantelle Atkins appeared to steal milk from the Minute Mart.

In Tuesday’s episode of the soap (January 7 2020) Chantelle and abusive husband Gray returned from their second honeymoon, which they went on after they renewed their wedding vows.

Returning to Walford, Chantelle went to the Minute Mart where she picked up some milk and placed it on the counter.

But she soon realised she was stood next to Jags Panesar, an old school friend who she once dated.

She asked him what he was doing there and if he had more work on, but Jags explained he and his brothers had moved to Albert Square.

After revealing they were just doors apart, Jags asked Chantelle about her family and she told him she lived with her husband Gray and two children.

After a quick catch up, Chantelle offered to help him home with his shopping.

When she picked up his bags she also grabbed her milk, appearing to not pay for it before leaving the store.

Viewers noticed this and were quick to point it out.

Did anyone else notice Chantelle didn't pay for the milk? She just walked out with it #EastEnders

Just catching up on @bbceastenders did Chantelle rob the milk? #EastEnders

Did Chantelle pay for that milk! #EastEnders

Did Chantelle just steal the milk from the minute mart? 🤷🏻‍♂️#Eastenders

Did Chantelle actually pay for that milk? #eastenders

Did Chantelle just walk out of the shop without paying for the milk? #Eastenders

As Chantelle left the shop with Jags, Gray saw the pair leaving and was obviously jealous at their interaction.

Did Chantelle actually pay for that milk?

Later in the episode, Gray got Chantelle to take a pregnancy test but was furious when she wasn’t upset by the negative result.

Gray grabbed her arm and as she tried to pull away he twisted it, causing her arm to break.

He later took her to the hospital, but she blamed herself for her injury, saying she shouldn’t have pulled away from him.